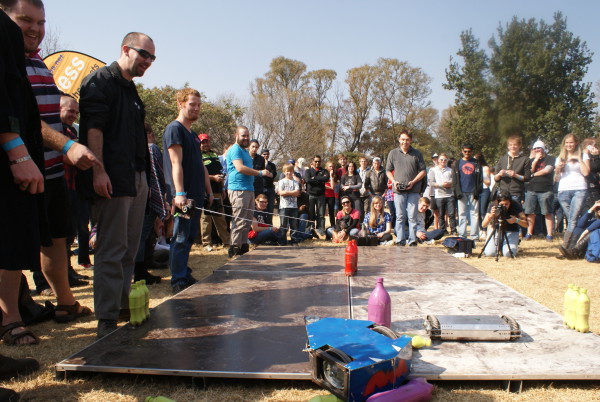 ROBOT WARS: Leading up to the fights contestants had to put their robots through a number of challenges. Here robots El Diablo (right) and Deathray (left) raced each other with Deathray losing the round by driving off the stage. Photo: Samantha Camara

“It’s robot wars fuck yeah! Oop’s there’s kids around,” shouts Ryan Young as he announces the beginning of this year’s Robot Wars which took place at Geekfest on Saturday.

Robot wars is an annual tournament that has taken place at Geekfest for the past three years where people build up their own robots and battle it out. A geeky event where participants, such as myself, “have some fun, test their metal and that’s it,” says organiser Richard Harman.

On the day, the wars started out with the robots having to do a couple of challenges to earn points such as tug of war, a speed race and knocking over colourful bottles.

El Diablo, a rectangular silver plated robot with barracuda MX8 tracks, and my team’s robot Deathray, a blue metal plated kite with a flail, are the first to take part in the challenges. The Krugernator, a sleek black robot with a claw that has a crushing force of 800kg, arrives late but just in time to take part.

Once all of the challenges have been completed El Diablo comes out on top of the rankings, but others didn’t do so as well.

“So far it hasn’t treated us all that well, we haven’t done that well in the challenges, which have been on things like speed and so on,” says software programmer Mike Krug whose team built the Krugernator.

“But I think the true test is in the final challenge,” he says before the final fight.

To get a robot to a point where it can speed around a platform isn’t easy, there is a lot of time, money and energy that goes into building these mean machines.

“The usual challenges were prototyping, things like parts that don’t work because they’re not intended for what you’re doing or they are too light,” says David Menasce who built El Diablo.

Other difficulties included time restrictions, space constraints and making sure that you follow the rules. “We tried to remain within the regulated rules of the competition as well,” says Romeo Botes, the driver of the robot Monty, when he spoke about trying to fit in a weapon.

Monty, the fourth robot, finally arrives before the last fights. Here the four robots have to fight one on one until a champion is declared and then they face off in the four-robot annihilation round.

Monty, a wedge robot with black metal plates and yellow wheels, puts up a fight but he’s no match against El Diablo. Then it’s my team’s Deathray against the defending champion, The Krugernator. The fight is fierce but in the end Deathray was victorious.

The next fight ends with a tie as Monty is unable to push The Krugernator off of the platform and then its El Diablo and Deathray in the final battle. The two spin around each other for a while but El Diablo is victorious as he finally pushes Deathray out of the arena before driving off himself.

Last but not least is the four on four fight. Deathray is the first to be excluded as he drives himself off the stage. Then it’s the Krugernator and El Diablo, the two face off for a bit, but it’s El Diablo who wins in pushing force. Now it’s just El Diablo and Monty, who was unable to move from his corner and, after a few misses, El Diablo finally takes victory.

“It feels awesome! It’s a huge adrenaline rush. It’s very rewarding after putting all that effort into it,” says Menasce as he happily holds his robot after the fight.