No support for Wits football team 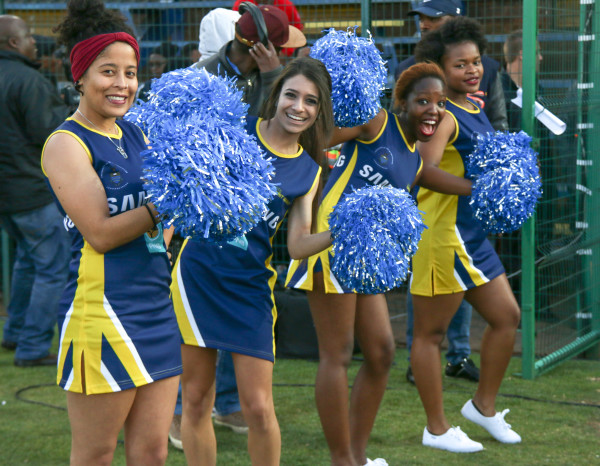 BURSTING WITH SPIRIT: Pumping up the crowd, the Wits cheerleaders are at every match religiously, despite the low fan turn-out. Photo: Rafieka Williams.

With a capacity for 5 000 people, the Bidvest stadium has been barely filled during the past two home games, reaching a peak of about 300 fans, this despite over 2 000 free tickets handed out at lunch times before the pre-match week.

A planned beer garden to drum up excitement for the Wits football team has been cancelled due to time constraints and a lack of commitment from sponsors, the latest example of the team struggling to get support.

Wits is due to play an upcoming home match against the Tshwane University of Technology on Monday. The beer garden is now being planned for the next home game.

The roar of the crowd is enough to inspire any team to victory, but not if there is no crowd. The Wits Sport office is growing ever more concerned at the lack of fan support during this year’s Varsity Football tournament, and is thinking of new ways to gather fans for the Wits team.

“Wits played incredibly well against the NMMU-Madibaz last Monday by winning 1-0 against them, but we were disappointed with the supporter turnout,” said Wits Sports officer Marcus Toerien.

Toerien believes that this lack of spirit derives from a culture the university has institutionalised that favours rugby over football.

“The beginning of the year Varsity Shield tournament (rugby) drew thousands of supporters to the stands of the Wits Rugby stadium,” said Toerien. “Why can’t fans support football in the same way?”

Even though banners and an extensive social media campaign had been put into place, the supporter turnout is poor.

“Other universities where the same tournament is being played have stands filled to capacity … There is a deep lack of spirit amongst Wits supporters.”

“We want to give students a tournament that they love by showing that football at Wits is not just for die hard football fans … It can be enjoyed by everybody.”

With a capacity for 5 000 people, the stadium has been barely filled during the past two home games, reaching a peak of about 300 fans, this despite over 2 000 free tickets handed out at lunch times before the pre-match week.

This lack of support has called into question the lack of spirit at Wits, especially when it comes to football.

“We are urging everyone at Wits, staff and students, to come and support our team every Monday … Without your support, our team will suffer.”

The Varsity Football tournament has been running from July 20 and will end on September 24.