Members of the Gauteng region EFF trashed the tent of the End Times Ministries church in Shoshanguve, Pretoria. The Pastor has been feeding grass, hair, snakes, and rats to his congregants.

The EFF in the Gauteng region dismantled and allegedly burnt down the church of a pastor who has been photographed and filmed feeding his congregation snakes and rats.

“Fighters must not back off from this honorable task aimed at ensuring that the mischievous impostor-pastor gets a taste of his own medicine, literally.” Mandisa Mashego, Acting Chairperson of the Gauteng EFF said in a statement last Friday.

ANN7 captured images and videos of people dressed up in EFF regalia, tearing down the church tent and burning it on the street.

The pastor, Penuel Mnguni of the End Times Ministries has been on the news recently for performing “miracles”, like walking on top of people, riding his congregants like horses, and making them eat grass. The self proclaim prophet was arrested and later released on bail last month for animal cruelty, but the charges were withdrawn due to lack of evidence.

But despite all of the controversy, his church members still support him fully, with one man commenting below a sermon posted on the End Times Disciples Ministries page saying, “my advice to you is that,continue with the work of God,continue to glorify God the father,Jesus said,”if the world hates you,know that it hated me first”,God will protect you,but to those that touches you must remember this: “Do not touch my annointed”.”

The EFF National Spokesperson, Mbuyiseni Ndlozi took to his Facebook page to explain the rationale behind the act, 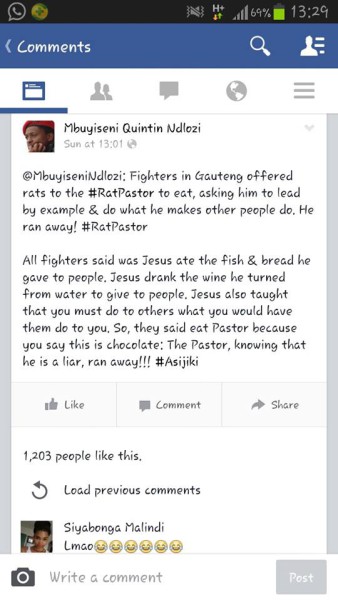 But the EFF can’t just vandalize peoples’ place of worship.