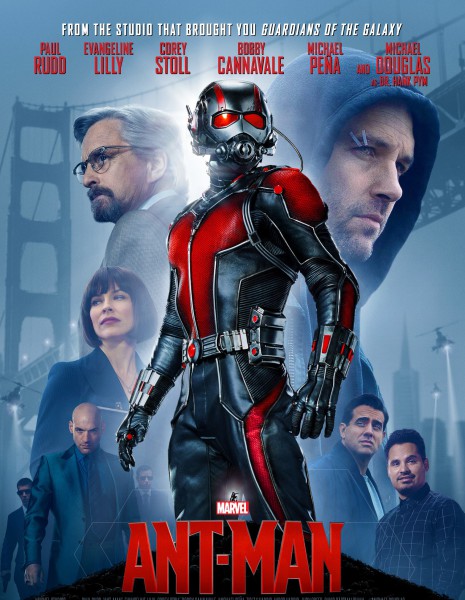 When you think of a Marvel superhero movie, a suit that shrinks a man to ant size isn’t the first thing that comes to mind. But then you would be wrong. This “ant sized” film with its understated style packs a superhero sized punch to follow in the footsteps, and sometimes surpass its big budget high action predecessors.

The film follows recently released ex con Scott Lang (Paul Rudd) who committed a Robin-hood like heist. Lang has lost touch with his daughter and cannot see her because of his inability to financially support her. After failed job attempts Lang is pushed to return to a life of crime where he meets the innovative and solitary scientist Hank Pym (Michael Douglas), who has one last job for him. Pym wants him to steal his old prodigy and villain, Darren Cross’s (Corey Stoll), size-changing prototype dubbed the Yellowjacket in order to save the world. Using the newly acquired Ant-Man suite that allows him to shrink and to hone his ant-like senses, Lang sets out to win back not only the Yellowjacket suit but the respect of his daughter Cassie (Abby Ryder Fortson).

The film is humorous and understated. This creates a fresh spin on the traditional spectacle based superhero adventures that we are accustomed to like Avengers: Age of Ultron. Ant-Man manages to change every day spaces into hyperreal action scenes that give the audience a jolt from the expected superhero genre.

The film doesn’t take itself too seriously and pokes fun at the unconventional concept with the hero not training in a hi-tech lab or fighting his nemesis in a spectacular fight scene with collapsing buildings and burning cars like we would expect. Instead he trains in his mentors back garden and his great battle with the villain takes place in his seven-year old daughter’s bedroom with Thomas the Tank Engine making a special appearance.

The storyline does however often struggle to justify each and every action scene. Even stranger is the inconsistent relationship that the movie makers have created between Lang and his estranged wife. His ex-wife is cast to have an amicable and even friendly relationship with Lang yet is stone hearted when it comes to granting Lang any access to their daughter, Cassie. The choice of Lang as the perfect person for the heist also seems unlikely as he had only performed one previous crime in his life and doesn’t embody the characteristic of the traditional hero. The heists are nevertheless still slick and expertly planned.

Despite its differences from the Marvel traditional movies it still has references to Shield and the Avengers sprinkled throughout the plot to tie it into the comic book film franchise.

Paul Rudd plays a charming human super hero and brings his easy going wit effortlessly into the character. To add to the comedy of Rudd’s natural style, is Lang’s criminal gang with Luis (Michael Peña ) bringing a goofy spin that shows another side to his comic abilities. Michael Douglas’  performance is good and along with his daughter, Hope (Evangeline Lily). Rounding up  a cohesive group of characters that interact well. Corey Stoll however lacks the necessary presence to make a convincing portrayal of a villain. An endearing and unexpected character is also created in an ant affectionately known as Anthony.

If its big budget action packed with a large cast that you’re looking for then this isn’t necessarily for you. That said, Ant-Man still took 130 Million Dollars to produce (less than half of what the cost for Avengers). The film surprisingly stands up to its bigger counterparts in its unique smaller scale. All in all the plot theme of the smaller the better echoes the sentiment of the film as a whole.