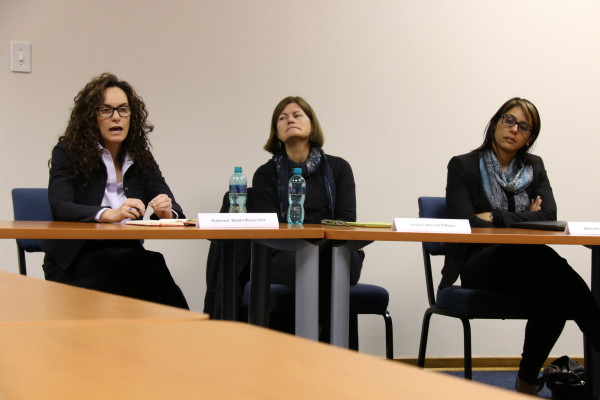 In the midst of various female-focused campaigns and celebrations of Women’s month in South Africa, a group of women intellectuals highlighted the importance of recognizing that gender issues affect not only females but males as well.

The Ubulili campaign of the Students for Law and Social Justice (SLSJ) at Wits, hosted an all-female panel discussion on the “Current Gender Disposition” in South Africa. The panel, consisting of former Constitutional Court Justice Kate O’ Regan, Advocate Kameshni Pillay and Professor Bonita Meyersfeld, emphasised that gender issues are not exclusive to women.

Justice O’Regan used her findings of the Khayelitsha Commission to explain that gender is construct which affects men in less obvious ways. According to her, young men in Cape Town succumb to pressures of joining youth gangs as a means of belonging and for personal protection.

“These boys are forced into youth gangs simply because it is seen as a norm in their communities and it is a means of safety for them, but once they’re in, they cannot leave.”

O’Regan also highlighted the issue of sexual orientation-based violence despite the legalization of same-sex marriage in South Africa. Lesbian women still live in fear of corrective rape, and gay men are often bashed because their sexual orientation does not conform to society’s ideas about masculinity.

“We need to be careful about the notions we as a society have on what it means to be feminine or masculine,” Prof Meyersfeld cautioned the audience.

“In order to eliminate gender-based violence, we need to see each other for what we are capable of rather than what group of society one belongs to,” she added.

Cherise Cleverly, the Ubulili coordinator said the aim of the event was to generate a discussion about the “different nuances of gender disposition, that gender issues are not just limited to females, but males as well”.

Males also encounter domestic violence, but there is still a stigma attached to the victims. For Molefe Mphye, a third year BA student from the University of Johannesburg, in his culture, “men are still considered heads of the family, so they cannot be weak, therefore can’t be victims of any form of abuse”.

Cleverly told Wits Vuvuzela that Women’s month should not only focus on the issues that affect women, “but also seek out the root problems which lies in gender roles perceptions that society has”.