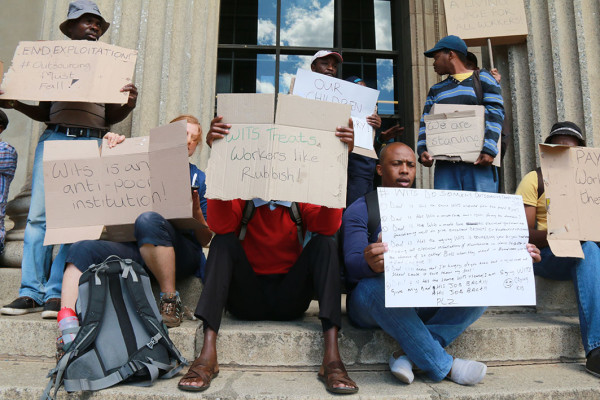 Dismissed MJL Electrical workers, who were hoping to secure their Unemployment Insurance Fund (UIF) last week, face more disappointed as the Department of Labour refused to approve their applications.

Former electrical workers who worked at Wits University and lost their jobs earlier this year, were told last week that they will not be able to claim from the Unemployment Insurance Fund (UIF). The workers submitted their application forms to the Department of Labour (DoL), but were told that their PAYE (Pay As You Earn) numbers were incorrect.

Richard Ndebele, one of the workers, said the group of 22 went to two different DoL offices in Alexandra and Roodepoort but were given the same message.

“I told Solidarity (Wits Workers Solidarity Committee), to pass the message to our lawyer and NUMSA (National Union of Metalworkers of South Africa), but we will wait for them to find out from the liquidator what this means,” Ndebele said.

The workers’ former company, MJL Electrical, was liquidated in April this year. Soon after the workers discovered that their employer, George Cressworld was deducting pension and UIF from their salaries but not paying to the relevant funds. The workers will also receive their outstanding salaries from the liquidator.

“We were told that we can claim for the days we worked up to the day the company got liquidated,” Ndebele said.

Earlier this year, Wits promised to assist the dismissed workers by trying to find jobs for them with other university contractors. But last week, deputy vice chancellor Professor Tawana Kupe sent an email to Ndebele last week saying the University is unable to assist. “I would like to report that I have through my efforts not been able to find any possibility of jobs for the former MJL workers.” Of the twenty two dismissed workers, only 1 has found employment since April.