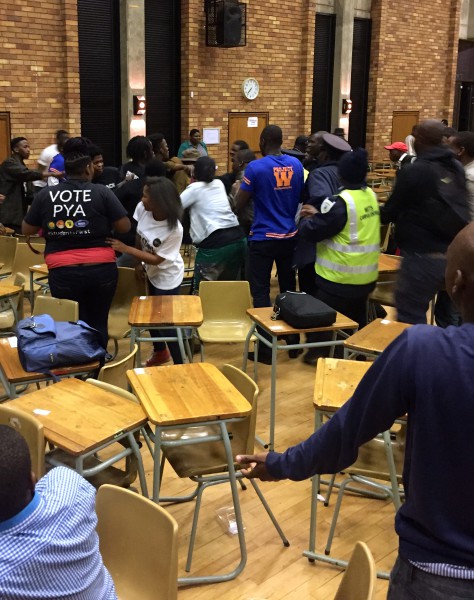 Another SRC campaigning circus ends before it even starts.

The crowed that gathered for the SRC circus at the exam hall on the education campus on Monday evening were sent home before all the parties contesting the elections were given the opportunity to give their opening statements.

The crowd settled into the hall and the opening manifestos began. The PYA took to the floor first followed by Project W.

Project W was then interrupted by chants of “Pay Back the money by the crowd.” Earlier that afternoon, at a lunch time circus, SRC president Shaeera Kalla demanded Project W account for the half a million rand they claimed to have raised for the Wits humanitarian fund.

The organisers stopped the clock on Project W in hopes of calming the crowd.

Suddenly a scuffle broke out between a supporter of the PYA and a Project W member.

Details are still sketchy around who exactly initiated the altercation. A Project W member told Vuvuzela that a PYA supporter smacked him on the neck while filming.

When asked, the PYA said that they did not see exactly what happened and could neither confirm nor deny that the altercation was started by a PYA supporter.

This comes after a very interesting few weeks surrounding election campaigning. Last week the Wits EFF where suspended from the elections by the Council of the Witwatersrand following a physical altercation that occurred at the Great debate between the parties.

It will be interesting to see the outcome of this week’s electoral poll.