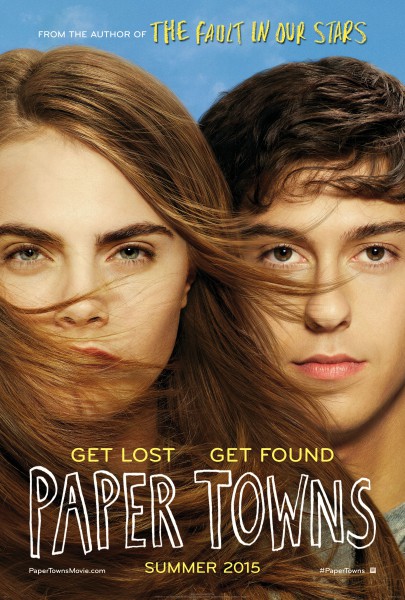 Yes Paper Towns does star supermodel turned actress Cara Delevingne but before you rush off to go see it, maybe you should know there is no need.

Quentin (Nat Wolff) has always seen Margo Roth Spiegelman (Cara Delevingne) as a “miracle”. Despite being close as children they have drifted apart and Quentin has admired Margo from a far.

The enigmatic, free-spirited, punkish (and sometimes annoying) Margo shows up one night at Quentin’s window to take him on one last adventure after which she disappears. Quentin finds clues that Margo leaves behind, which he uses to find her.

To help him he has his two best friends Radar (Justice Smith) and Ben (Austin Abrams), Margo’s friend Lacey (Halston Sage) and Radar’s girlfriend Angela (Jaz Sinclair). To a large extent this supporting cast is the highlight of the film. The group go on an epic road trip from Florida to New York State in an attempt to find her. Along the way relationships blossom and we are taken on a journey to rediscover friendships.

The film is based on a book that was written by the author of The Fault in our Stars. Even though there are many similarities between the two, this film takes the viewer on a very different journey.

Both films have characters who are nearing the end of their adolescence and approaching adulthood. The films are also very similarly shot in terms of style, narration and trying to pass on a bigger message.

The story shows the dangers of putting someone on a pedestal whilst one of the best aspects of the film is the portrayal of friendship between Quentin and his two buddies.

Paper Towns gets an ‘okayish’ review. It entertains and brings across a bigger message, but you won’t always find yourself at the edge of your seat. So if you are looking for a pleasant film outing, go for it! But it won’t hurt to wait for this one to come to our television screens.