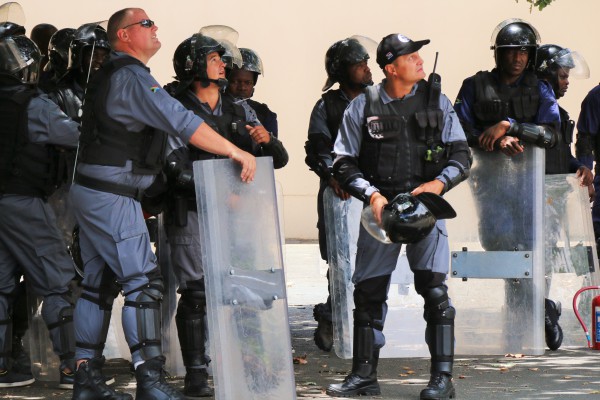 Public order policing were called after a group of around 20 students carrying mattresses attempted to occupy Solomon/Senate House on Thursday night.

Campus security were called in along with private security with some of them wearing helmets and carrying batons.

A short statement was read to the protesters by Campus Control head Michael Mahada telling them they had five minutes to leave. Accompanying Mahada were members of the SA Police Service. One of the police officers took video footage of the protesters as they left.

The use of public order police comes after Vice Chancellor Adam Habib earlier said he was reluctant to bring in police on campus to deal with #FeesMustFall protests which had threatened to stop registration. Habib had said he did not want to invite police officers onto campus and was using private security as an alternative.

“Once they [public order police] are invited onto campus, one is not allowed to limit their operations or influence their tactics and strategies,” said Habib in a letter he wrote last month where he addressed concerns by Wits academic staff over security on campus.

After being forced from the concourse, students attempted to move their mattresses into computer labs but were stopped by security. They then broke into groups and left the building.

A few hours later a mattress was set alight in the back of the Wartenweiler Library but there were no injuries reported, according to a statement by Wits University.

Wits said it was deploying further security throughout campus and along bus routes after the attempted occupation and the Wits bus that caught fire outside Knockando Residence in Parktown late on Wednesday night. “The safety and security of our staff, students, visitors and property remains paramount and we will not compromise in this regard,” according to the university.

It is unclear as to whether the groups of protestors were associated with the #FeesMustFall movement.

The university remains open today with classes operating as usual. “Additional security are on standby, should they be required,” said the university.