Students are frustrated by the poor maintenance and monitoring at  CNS labs on campus.

Wits students are frustrated with computer labs not being regularly maintained or monitored by the Computer and Network Services (CNS) during school hours.

Wits Vuvuzela went to Commerce Law and Management (CLM) computer labs on West Campus and discovered that 22 computers, out of 138, were not functioning. FNB 2A and FNB 2B labs had a total of eight broken computers between them.

Thabiso Dlale*, a 2nd year Information Systems (IS), student said that computers which run “re-imaging” updates in the week cause a big inconvenience because students are trying to get their work done.

“This could have been done before the term began,” said Dlale, “or they must do a once-off maintenance over the weekend.”

Bradley Johnson, a computer lab assistant, explained the procedure on encountering a “faulty” computer in the lab.

“If we find a faulty computer, we first try to fix it, if it cannot be fixed, we do an accurate report on it and email it to CNS.”

Johnson said this is the procedure they follow each time they encounter a faulty computer, “even if it has been reported before”. The time taken to attend to these reports varies, “sometimes they attend to it timeously or the PC must be physically replaced if there is a major issue”.

Johnson also said that labs will only shut down in the day when they have to run “emergency maintenance”, otherwise “for major operations, they do notify (students) a week in advance”.

A website (kim.wits.ac.za), supported by Knowledge and Information Management (KIM) has been used to communicate information on maintenance runs to students. It was last updated on March 9, 2016 to notify students and staff of hardware maintenance that would run on March 13th, to “help improve service delivery on many systems”.

Dlale said “labs get full during lunch (with people eating and watching series)”.

He said, “Someone needs to control this because it becomes a problem when people need to do work.”

Onele Ntusikazi, a first year BAcc Science student, raised a similar complaint but said, “You can’t really do anything about it (students watching series), sometimes I just wait, but I want to do serious work, and if they could fix these computers that are not working, it would help.”

Thando Mbale, a student lab assistant said, “you can’t keep your eye on everything” but if there’s a long queue, “we tell these students to excuse themselves”.

According to the Wits website, CNS Service Desk helps students who find problems when “accessing email, using the internet or standard software programs”. It also offers configuration support to students.

The CNS Director Mr.Xolani Hadebe was not available for comment at the time of publication.

*Students who work in the lab requested anonymity 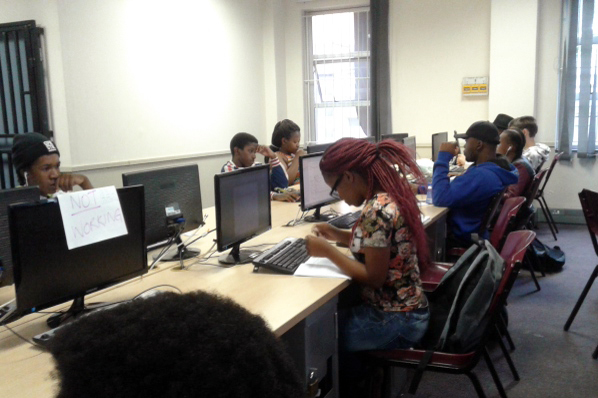 TECHNICAL MALFUNCTION: Students are frustrated with the lack of maintenance and monitoring in the CNS Computer Labs on campus.