Wits student protests against fees and outsourcing workers that broke out today, have come to a standstill. 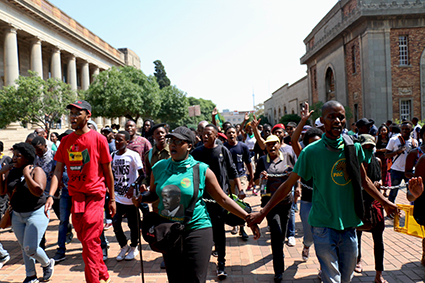 Protests against fees and outsourcing at Wits University have come to a pause following a day of disrupted lectures, a partial shutdown of the university and a lecture hall being set alight.

Wits Economic Freedom Fighter (EFF) leader, Vuyani Pambo addressed the crowd late on Monday afternoon and said they would regather the people to continue the protest.

“We are trying to close every place we can possibly close,” Yaphi said.

The protest took off on Monday morning, when students from #FeesMustFall campaign met at the Wits fees office. Workers from the Matrix joined in the protest and shops at the Matrix were subsequently closed.

Workers and students started singing and chanting in Senate House while blocking the lifts. Protestors were also able to temporarily block the entrance to Wits on Empire road. The protestors marched from Empire road through campus singing “Asinamali” [we don’t have money] and other protest songs, up to the Wits Theatre before re-entering Senate House.

Along the way, some protestors tipped over bins and pulled trash from them.

Sandla Mtotywa, a member of Wits EFF, said they were protesting for the students who were not able to pay their waived fees and are being forced to sign an “Acknowledgement of Debt” form.

“We don’t want them to sign, they don’t have to be deregistered”, said Mtotywa. He said he was participating in the protest for “free quality education”.

Deliwe Mzobe, a worker leader, said the reason behind this protest is because “about 500 students from education campus were deregistered, and they don’t have funding, so they can’t attend school.”

Outsourcing, according to Mzobe, is also an issue for the protest. Matrix workers and vendors have been excluded from plans to insource workers and top-up salaries. Mzobe said the protesters are fighting for  outsourced workers to be insourced.

Wits Progressive Youth Alliance (PYA) member Sabelo Ngubeni also joined the protest. He told Wits Vuvuzela that he finds it unjust for academically deserving students to be sitting at home because of financial exclusion. He said the government, university and other stakeholders have to come to the table and have to resolve it.

Wits University issued a statement on Monday afternoon calling the burning of the lecture hall at Umthombo a “criminal act” and that police have been called in to deal with protestors in violation of a court order against intimidation and damage to property on campus. The university has also denied that any students have been deregistered for failing to pay fees.

“Additional security has been brought onto campus and all entrances and exit points have been secured. The additional security will remain in place. University activity will continue until further notice” the statement said.