City of Johannesburg has taken to private services to clean the city.

Pikitup strikes continue and the City of Johannesburg has turned to private services to deal with the problem.

Johannesburg Executive Mayor Councilor Parks Tau has initiated a special operation to clear all illegal dump sites in the city.

Phindile Chauke, who deals with mayoral communications, said they had launched a clean-up campaign on Good Friday and are “prioritizing areas of high health and hazard risk” – these include Alexandra, Ivory Park and Diepsloot. 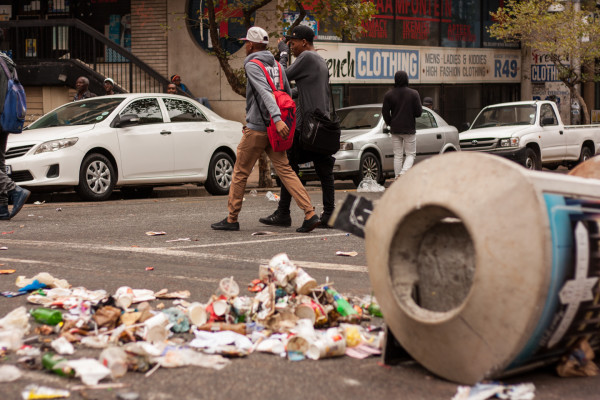 NOT PIKITUP: Private service providers have been delegated to clean the city, while Pikitup workers continue their strike. Photo: Kyle Oberholzer

According to Chauke, the City of Johannesburg has allocated landfills for communities to leave their waste and they are trying their best to restore the service, because “service delivery has to happen”.

“We encourage residents to use the allocated spaces to reduce and avoid further health hazards,” Chauke said. A Johannesburg resident, Lindiwe Malindi, who stays on Jeppe and Joubert Street described the area as “a mess” and said that no community initiative has come forward to clean up because “it needs to be dealt with via public service providers”. Malindi added that on Monday night she saw the police escort The Red Ants to clean the streets, which has improved the state of the area.

Brent Van Denverg of Mr Rubbish, a private refuse collector based in the northern suburbs, told Wits Vuvuzela that they have become extremely busy since the start of the strike and are often called into residential areas to collect home waste, which is then taken to registered landfills.

The allocated landfills for communities have been listed on the Pikitup website.

The strike is currently in its fifth week. Pikitup workers are demanding for their monthly salary to be increased to R10 000 and for managing director Amanda Nair to step down.