Students at the Wits Education campus say they are fed up with being neglected and want their own student representation and security.

Students at the Wits Education campus are moving to request that they elect their own SRC and have campus control deployed to their campus.

This motion surfaced at a protest held on Wits Education Campus yesterday afternoon, where there  approximately 100 protesters.The students held the protest in light of the disgruntlement with the selection procedure and final outcomes of the Funza Lushaka education bursaries. Postgraduate in Education student Matthew Vorster told Wits Vuvuzela that the demonstrations were not solely based on the issue of fees. 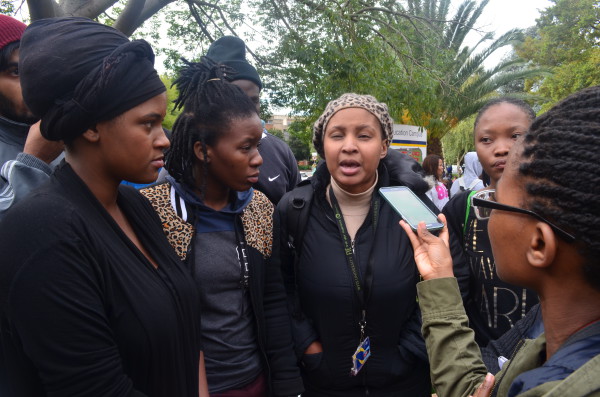 Students at the protest said it is about time that they [education campus students] are recognised as an equal part of the community at Wits and structures needed to be in place which would ensure this outcome. “This campus is treated as though it is still Joburg Education School, ” said  Vorster. The protesting students expressed their frustrations about the ‘red tape’ involved in achieving outcomes as simple as retrieving lost items, a process which involves making ones way to main campus in order to access campus control.

Students at the scene were reluctant to be interviewed due the fear of victimization but told Wits Vuvuzela that they would like SRC to come and engage them on their issues. The students expressed that they find fault in the fact that the Education Student Council is unable to make any real changes without consulting the SRC; a process which they deem tedious and unnecessary.

Student protests resumed on Education Campus in the morning.