No payment, no graduation 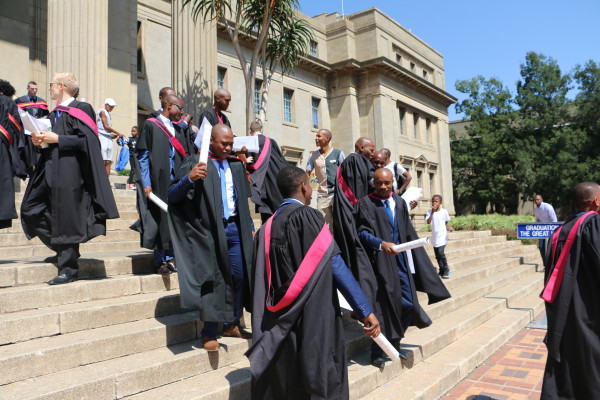 Despite completing their courses in the recommended time, Wits students are unable to receive their degrees due to outstanding fees.

Sibulele Mgudlwa and Luke Draper completed their studies in November 2014 but only received their degrees in March 2016.

The Wits registrar gave him a letter that basically said, “Sibulele has qualified but if you want his specific results call the university.” However due to past scandals of fraudulent qualifications, the letter failed to secure him a job.

Mgudlwa thought that due to his status as ‘former SRC president’, the university would make an exception but he found out that paying his fees was the only way to get his degree. “That’s the rule”, said Mgudlwa, “if you owe the university something, anything, you are not allowed to graduate.”

“Universities should reimagine their entire approach to tertiary funding” said Mgudlwa. He emphasised that the National Student Financial Aid Scheme (NSFAS) is not to blame because it is a useful government tool. However, Mgudlwa questions when the government will pay attention to the “missing middle”, who he defines as people like him who are “’poor’ but ‘not poor enough for NSFAS’”.

Draper’s BaPVA was withheld due to R7 000 of outstanding fees. Draper said, “it was a bit of an inconvenience” because he had hoped to apply for a scholarship to do his Masters but he needed a copy of his academic record.

Unlike Mgudlwa, Draper was able to get freelance work because he is required to perform so he can easily prove his qualification.

According to the deputy registrar of Wits, Nicoleen Potgieter, it was significantly only until the end of 2015 that the senior executive team of the university agreed to allow students, “who owed R15 000 or less and who signed an acknowledgement of debt agreement would be allowed to graduate”. Before this agreement a student with outstanding fees would not receive their degree or latest academic record.

Wits university spokesperson, Shirona Patel, said that there are a sufficient number of  students that fall into the “missing middle” and “the university is working with the SRC to raise funds for this group.” Patel also mentioned that the university has implemented payment plans to enable students to pay off their fees without accruing interest.”

However, Patel said that “the onus cannot be on the university alone to fund students.”

Mgudlwa and Draper both received their degrees on March 2016 thanks to private sponsors who paid their outstanding fees. Mgudlwa emphasised that, “the University needs to fix its statutes and all of those rules and then secondly relook their own pricing models.”