South Africans reacted with anger and disgust to a fake anti-gun advertisement that made the rounds on Facebook last week. 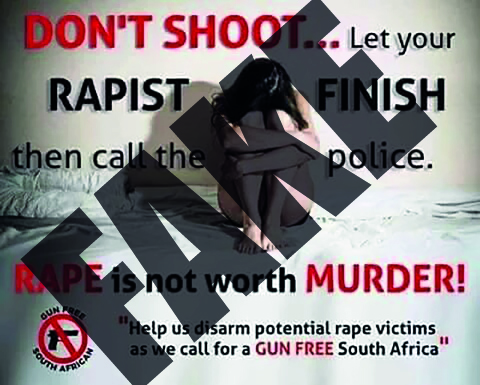 JUST A HOAX: The false advert that has been making rounds on social media.
Photo: Facebook

The advert calls on women not to shoot men who are raping them reading “Let your rapist finish then call the police.” The advert suggested that if a woman killed her attacker she would be convicted of murder.

“Help us disarm potential rape victims as we call for a GUN FREE South Africa,” read the advert.

Geraldine Moodley, Wits Justice Project Director was appalled by the advert, saying on the subject of self-defence, “there’s never a general rule on something like this. Take the Oscar Pistorius trial for instance. Every case is decided on its own merit.”

Moodley emphasised that it is important to “not allow the gun and such an advert to take away from the greater issue [of rape]” given the high statistics of domestic violence and rape that plague South Africa.

Prof Jackie Dugard, director of the Wits Gender Equity Office, shared the same sentiments. “Self-defence is a valid defence in criminal law and will always depend on the evidence and the case on its own.”

Dugard added that if a victim could prove in court that he or she were being attacked, raped and feared for their life, then the victim could probably succeed in their defence.

Gun Free South Africa’s spokesperson, Adèle Kirsten, said that they were unable to trace the original post and its source, which means they currently cannot lay charges of fraud against the guilty party.

Kirsten said as an organisation they are disgusted by the cynical advert and how it uses and exploits women’s vulnerability to rape.

“It attempts to mobilise women’s legitimate fear of rape to advocate for gun ownership in the home. And what we know is that a gun in the home places women at greater risk,” said Kirsten.