Advocate George Bizos, 87, has been rushed to hospital after falling and hitting his head at the University of the Witwatersrand. 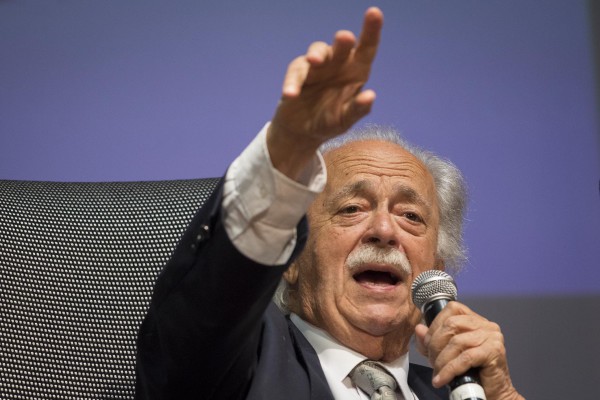 George Bizos was injured in a fall at Wits University earlier this evening. Photo: Wits Vuvuzela.

Wits Vuvuzela can confirm that Bizos has been admitted to Donald Gordon Medical Centre in Parktown. He was described by Professor Melissa Steyn, a family friend who had visited Bizos in hospital, as alert, and a concussion has been ruled out. Bizos will remain in hospital overnight for observation with one of his sons by his side.

Human rights lawyer and anti-apartheid activist, Advocate George Bizos, 87, was rushed to hospital earlier this evening after falling in the Umthombo Building at Wits University following a public lecture.

Bizos was visibly bleeding from a gash on the back of his head as he was helped to his feet by guests at the lecture. One of the guests offered his car to take Bizos to hospital. Wits Vuvuzela was not able to confirm which hospital Bizos was taken to by the time of publication.

Bizos was the guest speaker at a public lecture in commemoration of Freedom Month. Bizos reflected on his life experiences whilst guests were given the opportunity to ask his opinion on issues like #FeestMustFall, the decolonisation of universities and how South Africans should use their right to freedom without infringing on the rights of others.