Motorists must know their rights and avoid paying bribes to stop the cycle of police corruption.

POLICE corruption on the road remains an issue for the Johannesburg Metro Police Department (JMPD), as officials urge motorists to avoid paying bribes.
Wayne Minnaar, chief superintendent at JMPD, said motorists and passengers should never give a Metro police officer a bribe. They must report the corrupt police officer and “take down any information, the name tag and report the corrupt officer”.

Police stopped motorist and accused her of running a red robot
Chloe Prince, an honours student, said she was recently stopped by a police officer while driving home from Wits. She said he insisted that she ran the red robot.
“I told him I didn’t and he said no, I don’t care what you are saying, I say you did it, so you did it,” Prince said.
Prince said she was very frustrated and didn’t know what to tell the officer. She said he later started accusing her of other offences. “I got the sense that he was trying to find something to accuse me of, because I really hadn’t done anything,” she said.
“He might have said something about ‘how can you help me out here?’ I completely ignored that and didn’t respond, but he didn’t say anything explicitly about a bribe, which was a good thing,” said Prince.
Prince said she had heard that with run-ins with the metro cops or JMPD: “You must keep calm and not do anything, if they ask for a bribe then obviously don’t (pay it).”

Student was asked to pay his way of an offence (driving under the influence)
University of Johannesburg student, Shay Goyal*, said he encountered a similar situation a few times while he was under the influence of alcohol and had to bribe his way out. He said the JMPD officer asked [for a bribe] twice. Goyal said, “I was asked to step out of the vehicle and was forced to take the breathalyser, obviously it stated I was over the limit. I was then told they were going to arrest me and my car would be impounded ‘if I don’t have something for him’. I only offered a R100 and said I needed the rest for fuel to get home.”
Goyal said he would drive away if he was asked for a bribe “especially if he was accused for something ridiculous”. “I’d try to gain some form of evidence, either a voice or video recording and report it to the JMPD, and his ID would be good enough, I think.”
Minnaar said Metro police should never take a bribe, because it is illegal and drivers get away with committing traffic offences.

Information provided by Corruption Watch, know your rights and don’t pay your way out of an offence 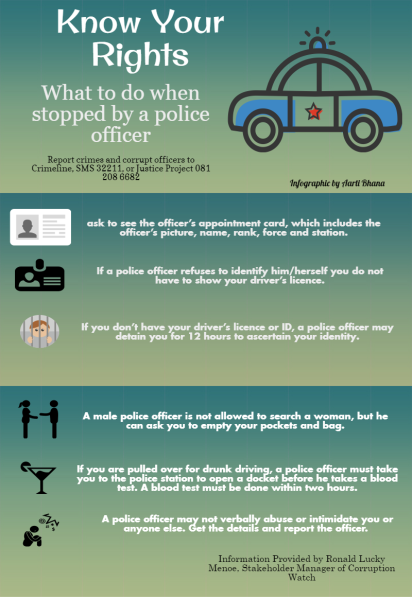 Motorists should report corrupt officers to the 24-hour anti-corruption line: 0800 203 712

Wits Vuvuzela  SA sees SAPS as most corrupt within the state, June 2012