The Wits Transformations and Employment Equity Office (TEEO) has trained 11 faculty members in mediation to aid in “conflict resolutions” and possibly limit the need for legal action.

Mediation is seen as a tool that can be used to better resolve conflict situations between people, restoring those relationships, according to TEEO director Lindiwe Manyika.

The TEEO itself only has five full time staff members and there was a need for more mediators.

Speedy mediation planned for all

“We have realised that the office will not succeed in addressing all cases for both students and staff in a speedily and effective manner,” Manyika said.

Pura Mgolombane, a unit manager at the TEEO, said that the training of mentors will more quickly resolve conflict.

Those that have been selected to be mediators are the human resource managers of each faculty of the university.

“It creates a bigger pool of mediators, that are also central to where people are and not just located in one area,” said Mgolombane.

The role of a mediator is to act as a neutral body and “assist parties in working towards a negotiated agreements of a dispute or difference with the parties in ultimate control of the decision to settle and the terms of resolution,” Manyika said

Mediation will result in benefits for both parties

A possible benefit of having the option of resolving conflict using mediation instead of legal actions is to place the focus on the relationship between the people involved. Mgolombane said that the hopes are that “both parties will feel that they have been listened to and understood.”

One of the reasons for the mediation project is to be able “to develop a community of mediators within the university. Part of the transformation strategy is to develop a culture that is free of discrimination,” said Manyika.

Pamela Mntonintshi, senior remuneration officer, said that “Wits will benefit through having more and more of its community being competent in addressing their own problems better.”

The long-term aim of this project is to “create a culture that is based on human rights and human dignity. To be able to solve things in a better space and solve own issues without needing legal action if it can be avoided,” said Mgolombane. 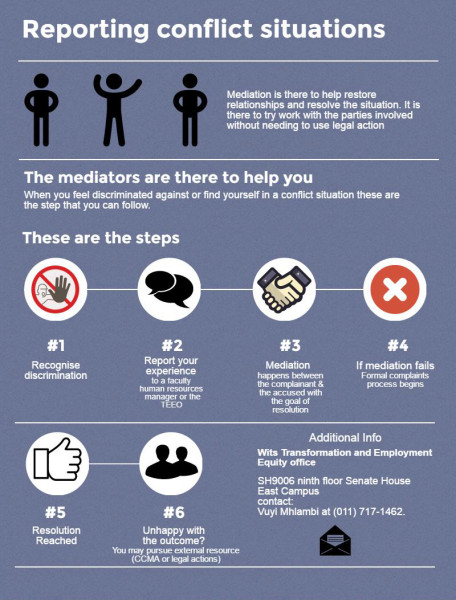