Eyebrow embroidery: the new trend in the brow world?

Eyebrow embroidery is quickly making waves as the new “must” in the beauty industry.

Putting the words “permanent” and “eyebrow” in the same sentence is enough to send any person running for the hills. Chances are, if you have spent any time on social media, you have been bombarded with a plethora of techniques in the art of filling in your eyebrows, but a new trend is slowly sweeping foreheads across the country.

Eyebrow embroidery is a relatively new concept that has gained significant traction amongst eyebrow geeks who have been searching for a bolder brow. While this procedure, also known as cosmetic tattooing, 3D eyebrow embroidery, and microblading, is quite common in Singapore and Malaysia, it has only recently caught on in South Africa.

The idea of eyebrow tattoos usually conjures up an image of a straight lined, blue-green eyebrow. That is not what they are.

Eyebrow embroidery is semi-permanent pigment that’s pushed into the surface of the skin with a fine blade to mimic the growth of your already existing hair to create bolder, natural-looking brows (yes, this sounds painful and apparently it is!)

The procedure requires no tattoo gun and has no no bleeding or downtime. Results can last up to three years, depending on different factors. A touch up once a year is recommended to retain the shape and saturation of the pigment.

Samantha Divaris, owner of the Brow Studio, has been embroidering eyebrows for two years and has noticed a definite peak in clientele in the last six months. “For a while, we were the only place who did the procedure, but now every second person is doing it.” 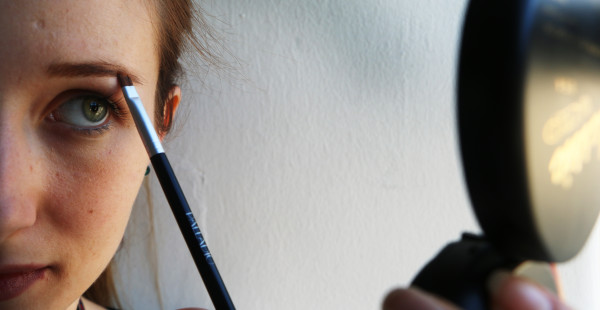 Eyebrow filling no more: Eyebrow embroidery has been dubbed the new trend in eyebrow grooming and is predicted to replace the need to fill in eyebrows.                    Photo: Nadia Omar

It is suggested that plenty amount of research and months of preparation must be made. Read tons of reviews on the studio you are considering, look for before-and-after pictures, and search for anything that could show the embroiders lack of experience.

Divaris emphasises the importance of only going to a professional as an amateur can damage the face and cause serious scarring, or worse give you permanant lopsided eyebrows.
“The procedure is 100% safe and since the ink is made from vegetable dye, distilled water and ethyl alcohol, there is no risk of allergies,” said Divaris.

However, people who suffer from any blood disorders should consult with their practitioner before embroidering their brows. Bleeding does occur during the process which may be harmful to the individual.

The procedure has received criticism for its semi-permanent nature and the high cost involved. “There are a lot of options on the market that do not require medical procedures and the risks associated with them that will deliver the same natural look,”says Shannon Correia, a freelance make-up artist.

“Your eyebrows frame your face so I’d be wary of a permanent brow shape in a world with ever-changing beauty trends,” says Correia.

“I don’t think eyebrows are going to move away from natural, fuller shapes so the semi-permanent aspect is of little concern,” says Divaris.

Eyebrow embroidery is certainly making waves in the beauty field, most embroiders in Gauteng, such as the Brow Studio in Parkhurst, are fully booked for the next three months.