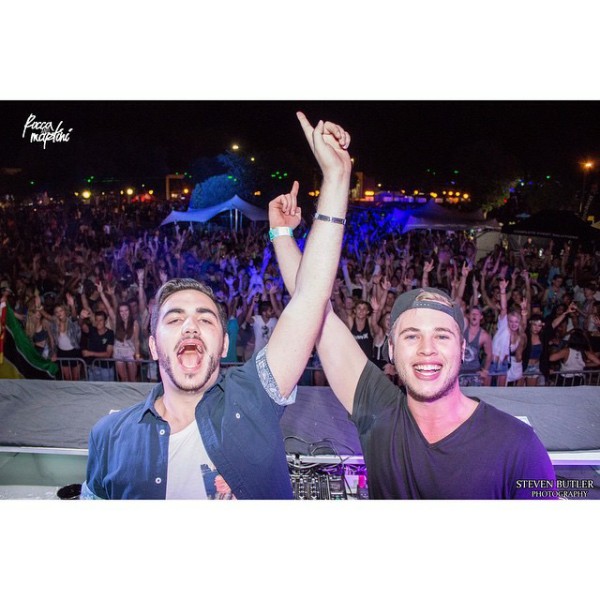 When and how did Rocca and Martini collaborate?

In high school we became friends via a mutual friend of ours. We both were DJ’s at the time with the love for the same kind of music and the same burning passion.

We had been DJ’ing individually during our high school years at the same clubs and events. We became best friends and started feeding off each other’s interests.

Rocca & Martini was born in June 2011 after we had decided that it would be crazy to market ourselves together as one and perform as a unit as it was uncommon for a DJ duo in South Africa. We both have a similar but different taste when it comes to music, that’s why it works between us as we both bring a different dynamic.

When did you both realize your passion for music and DJ’ing?

We have always had a passion for music from an early age. My father bought me a set of drums for my 5th birthday, so I guess I could say it started then for me.

Growing up, we would always nag our moms for the latest dance CD’s at the stores and that’s when the dance music bug had bitten us. After that we were so intrigued about how DJ’ing works, we were destined to learn more. During high school we were both mentored on how DJ’ing works and “How to” DJ by friends of ours. Since the first lesson we were instantly hooked and knew this is what we wanted to do.

Did you consider studying before perusing your DJ career?

No, not really. We wanted to be involved in something musically right from the get go, either as a DJ, producer or events coordinator.

As we grew older, we learnt that it wasn’t the only thing we can do. Justin works a 9-5 day job and I am completing my business studies through Unisa.

What are some of the challenges you as young artists face?

In today’s society, I would say it is very dog-eat-dog-like. People are selfish and are only concerned about what path they are on instead of stopping, helping and empowering the younger generation to keep a healthy music industry by teaching them the rights and wrongs. South Africa has a population of 51 million, United States is 10 times greater than ours so it would definitely say exposure is a definite challenge as you are competing in a very dense industry with a smaller consumer market. You need to design your brand in such a way that it will set you apart from others.

What is your proudest moment?

Every step we take forward is a proud moment for us as we are able to chase our dreams and make them become a reality day after day. These three moments stand out: the first time we were announced to play Main Stage at H2O in 2012 (at 19 years old) for the Afrojack Full Moon party. Second, performing on the same line-up as our idols Swedish House Mafia when they had the Johannesburg leg of their “one last tour”. Third, being announced that we would be performing at Ultra South Africa, this past February, which was our third consecutive Ultra.

What is your signature/trademark DJ’ing style?

We are definitely known for our electronic sound and high energy performances.

What do the next few years look like for Rocca and Martini and what would you like to see happen?

Short term – we have been working in studio on some new material to share with everyone. We also have some crazy events coming up which will be different to the norm.

Long term – an album or two, performing at major festivals locally and international and letting our dream let us travel the world.

What do you do in your spare time?

In our spare time we love to work on new ideas for projects being new music, performance sets or events. We love travelling and just enjoying the moment.