Pokémon Go has become a worldwide sensation, and students are quickly catching on to the trend.

If you’ve spotted a large gathering of students outside the Great Hall with their eyes glued to their phone screens in the past month, chances are they were playing the new mobile game, Pokémon Go.

Pokémon Go is a free location-based game where players, or Pokémon trainers, catch and train over 150 different Pokémon characters that they then use to battle against other trainers. The game has taken the world by storm, and shortly after its release on July 7, it became the most used Android mobile app ever invented, with players spending an average of 43 minutes playing it daily. 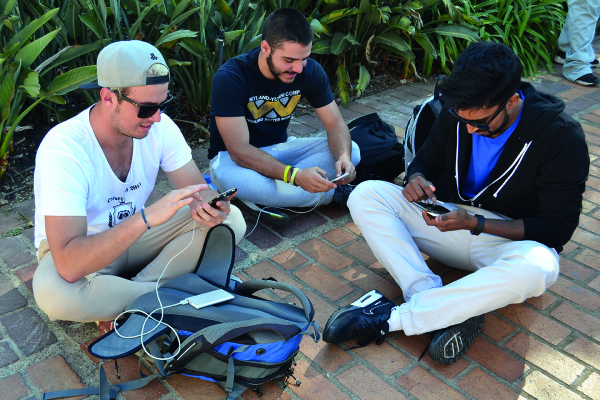 POKÉMON POWER: Students sit outside the Great Hall to play the game and power up.         Photo: Tendani Mulaudzi

“I think it’s a really big nostalgic trip for a lot of the fans of the series and the anime which came out in the early 2000s,” said Alessandro Barbosa (24), Wits Game Design graduate and gaming expert on CliffCentral, on why the game is popular.

Pokémon Go has led people to step out of their comfort zones to catch Pokémon, including leaving the house in the middle of the night when they are notified that a Pokémon is nearby.

Didi Allie, a second-year Fine Arts student, has embarked on a few unplanned excursions for the love of the game. “I took a taxi to Melville [from Wits] and I almost woke up at five in the morning to go to Rosebank but I was sick,” said Allie.

There isn’t always a need to venture outside of Wits, which Barbosa said is a great place to play the game as it’s populated with many Pokéstops, places where players can collect needed items, and gyms, where players use their Pokémon to battle one another.

“The campus is so well-populated with these… For example, Chamber of Mines and South West Engineering all have Pokéstops marked on them,” Barbosa said. “Walking from West to East Campus I can pass almost five or six of them in a small amount of time and gain a lot of items.”

The game is also a social one, which is a new and fascinating aspect of gaming according to Barbosa. “It’s gotten people outside and it’s gotten people who suffer with social anxiety speaking to other people just because they’re able to connect through a common interest,” he said.

Allie shares this point of view, and says that she has made plenty of new friends through the game, with whom she has created WhatsApp groups and whom she hurriedly calls over when a rare Pokémon pops up wherever she may be.