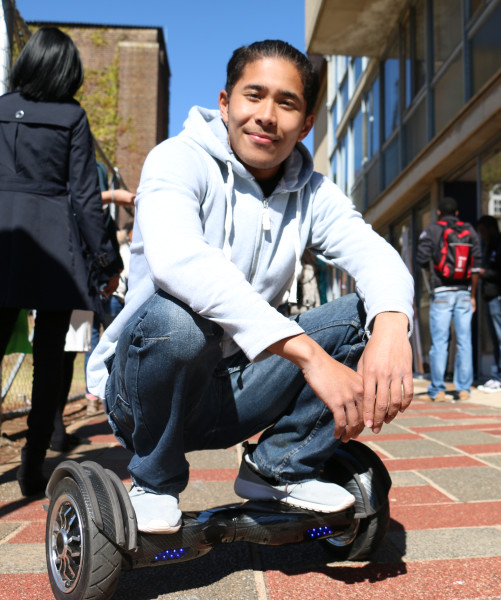 HE is able to turn heads rather quickly in the Wits vicinity, not because of his brisk walking or quirky hairstyles like other cool kids on campus, but because he glides across Wits on his ultra-cool hover board.

Marco Rademeyer, a fourth-year Film and TV student said his hover board is more of a tool that helps him experiment with his filming. It produces those perfect tracking shots.  He said the hover board was something he really wanted when he saw it and so he set out a goal to get it.

“I worked hard,” he said. He worked odd jobs and started a funding plan which helped him achieve this goal within four months. He started with his plan in February this year and bought at at the end of June.

“If you put in the hard work, you reap the rewards,” he said confidently.

Marco said his hover board helps him move around campus much faster but he still finds many hills and slopes a challenge at Wits: “I’ve never fallen off it, but if I feel I might, I quickly jump off.”

Marco certainly stands out from a crowd, and often gets complemented for being “so cool”.  He said campus control has stopped him but only because they wanted to try it, he joked.

A friend who was passing by, Motlalepule Mahlare, said if she had to rate Marco’s cool, he would definitely get an 8/10.