Maimane: “I can taste victory”

The Democratic Alliance(DA) is confident that it stands a very good chance to win all the metros that it has targeted – Johannesburg, Tshwane, Nelson Mandela and Cape Town.

This emerged at the party’s final rally on Saturday, July 30, ahead of the municipal elections on August 3.

“It’s never been so close, I can taste the victory,” the party’s leader, Mmusi Maimane, told the thousands gathered at the Dobsonville Stadium in Soweto. That is after he had welcomed them to his hometown: “I stand before you today, as outie ya hier mo kasi (a guy from this township ). You are in my home. Welcome!”

Maimane thanked all supporters and members of the party for “inspiring” and remaining “courageous” ahead of the Municipal Elections.

“We have the power that Madiba gave us,” he said.

Former DA Student Organisation chairperson at Wits, and current Ward 58 candidate for Tshwane, Dikeledi Selowa, said that the youth owed it to themselves “to go out there and make a difference”. 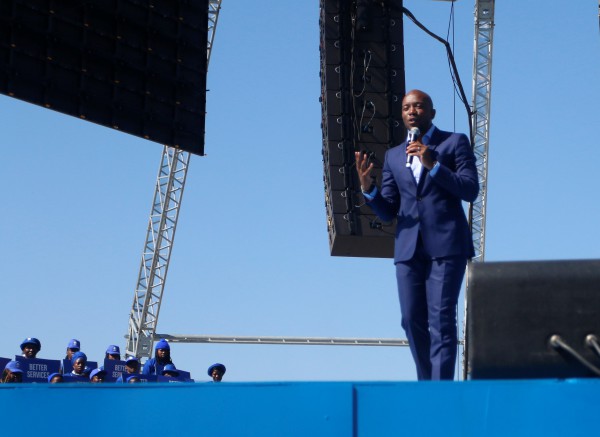 Selowa, said the rally was the party’s last chance to prove to the rest of South Africa that the DA is willing to deliver.”

The DA won’t have the last word, however, as, on Sunday, both the African National Congress and the Economic Freedom Fighters will host their final rallies, in Johannesburg and Polokwane respectively.