Investigative journalist writes about himself 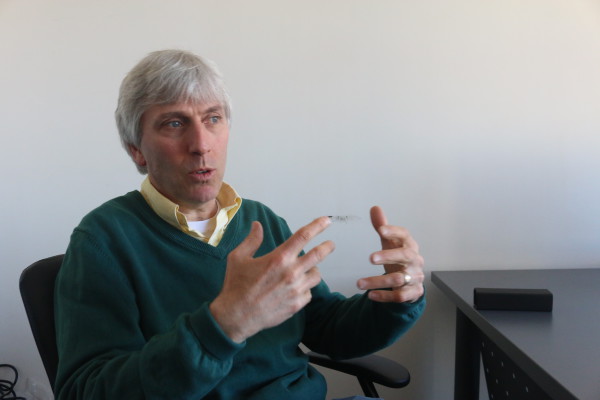 ON THE BOOK: Lowenstein talks about his book and how it came about. Photo: Nasya Smith.

Lowenstein is a former investigative and data journalist at Hoy and has won numerous awards for his hard-hitting journalism stories. His book though, ditches the data and focuses instead on Lowenstein’s personal views of the world and the people around him.

Meaningful Matters consists of approximately 75 of Lowenstein’s 1 100 original blog posts written over a 7 year period. According to Lowenstein, for people who read the book, it will hopefully allow them to, “think a little bit diﬀerently about themselves,” and the world around them.

The individual blog posts reﬂect on Lowenstein’s personal encounters, relationships, friendships and loved ones that have passed away.

It does not shy away from the emotion that Lowenstein clearly feels for every person in the posts. In the selection process of choosing which blog posts would ultimately end up in the book, Lowenstein’s wife, Dunreith, played a pivotal role.

For Lowenstein, a guest lecturer at Wits Journalism, South Africa has made a very big contribution to the book as he has spent signiﬁcant amounts of time working in this country and has forged relationships here that remain in place to this day.

Lowenstein arrived in South Africa mid-May to facilitate a data journalism course hosted at the Wits Journalism Department and is leaving on August 5 to Grand Valley, Michigan. He will be returning to South Africa for The African Investigative Reporting Conference, previously known as Power Reporting, in November this year.