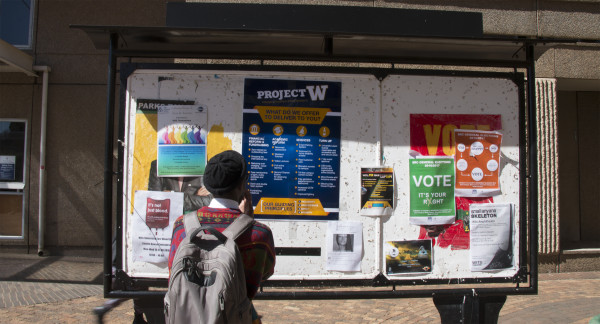 As students head to the polls to elect the 2016/2017 Wits University SRC, allegations of poster theft and vandalisation have emerged.

At the centre of these allegations is the incumbent PYA (Progressive Youth Allicance), which is accused by both Wits EFF and Project W of stealing election posters of both organisations during the official campaigning period.

“It’s the PYA,” said Project W spokesperson Jamie Might about the alleged theft. “They have the tendency of doing that. In the past we have apprehended them for taking down our posters,” he said.

Project W says it has sent numerous complaints to the university over the years about their posters being taken down, said Mighti, and this year was no different.

“Our view is that it’s a form of suppression of free speech, because when you take down the manifesto you are denying student voters the opportunity to investigate what other organisations stand for and what they represent,” said Mighti.

Wits EFF says it has lodged similar complaints with the university accusing PYA of removing their posters.

“We have laid a lot of grievances but the IEC favours them and won’t disqualify them like they did us,” said EFF co-ordinator Koketso Poho.

Poho said his organisation has laid about 4 grievances against the PYA regarding the “violation of the electoral code.”

Sasco chairperson Mpendulo Mfeka whose organisation is a member of the PYA, dismissed the allegations, saying that every organisation shares this problem during the election period.

“The PYA has no time to be busy taking down PW [Project W] posters. We have very serious students to serve. Everyone has been complaining about posters being taken down,” he said.

“We have been reporting it [to the university] for years and nothing has been done. It has become the nature of elections,” Mpendulo added.

Each student must bring a valid student card in order to be eligible to cast his/her vote.