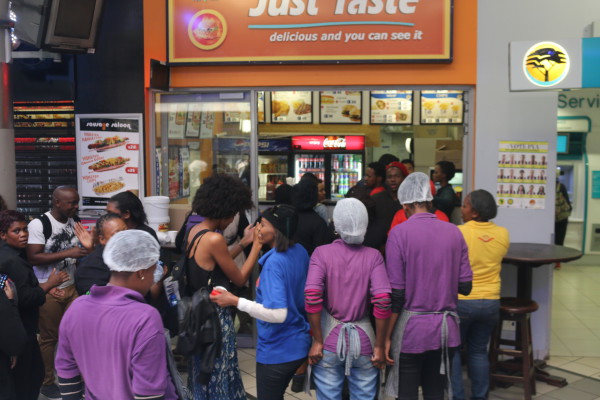 A group of about 40 people protested at the Matrix on Friday over the alleged firing of four workers have been fired by Sizzlers, a deli shop at the Matrix, for eating cheese, rolls and Viennas during their lunch hour.

Three of the four workers were fired on September 7, 2016 and the manager was fired on the 10th for the same reasons.

A group of about 40 workers picketed at The Matrix this after noon to demand that the Sizzlers Four be given back their jobs.

“They were fired for eating and nothing else,” said one of the picket organisers, Thandiswa Yaphi, who has also been fired by Sizzlers.

Yaphi said Sizzlers’ new management stated that it intended to downsize, retrench and cut salaries when it took over two months ago.  She views the current spate of dismissals and the reasons given by the new management as nothing more than a ploy to get rid of the current lot of workers so the deli can hire cheaper labour.

“When the new management took over they said we are earning too much,” Yaphi said.

Sizzlers was closed down on Friday afternoon after the protest. Wits Vuvuzela could not reach the new management for comment.

Yaphi said Sizzlers’ employees earn R 3 000 a month – a minimum wage which was agreed with the Wits Bargaining Council during the Insourcing Task Team deliberations with workers.

Official reasons given by Sizzlers for axing the workers are dishonesty, removal of property and financial loss, said Yipha.

However the workers contend that making lunch during lunch time has always been an accepted practice at the deli until the new management took over.

“Some of the workers have been working here for ten years and this new management is here for two months and just fires people,” said Yaphi.

The last two remaining Sizzlers’ worker are also facing similar charges as their former colleagues and will have a hearing tomorrow at 9am and 10am, respectively, at the Wits Science Stadium on West Campus.

“This is nothing more than the exploitation and victimisation of black workers,” Yaphi said.

A demonstration will take place tomorrow from 9am at the Wits Science Stadium to show solidarity to the two workers attending their hearings.
.