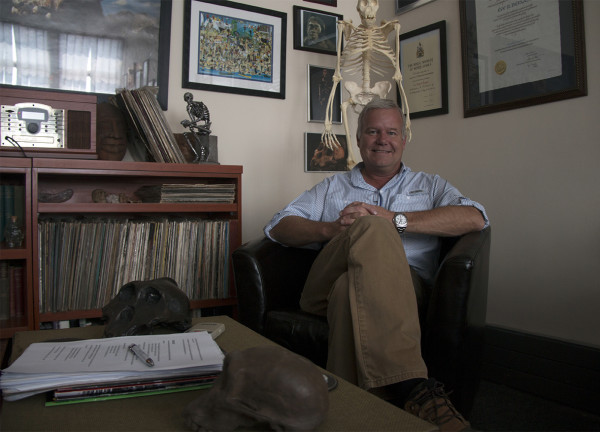 RENOWNED: Lee Berger has won yet another prestigious award for his work
Photo: Mokgethwa Masemola

Berger is a world-renowned academic at the University of the Witwatersrand, a paleoanthropologist and lead explorer on the expedition that discovered the Homo naledi fossils in 2013. Earlier this month he was awarded the 2016 National Research Foundation (NRF)’s Excellence in Science Engagement award. The award is given to academics and scientific councils whose contributions to public engagement with science have been outstanding over a length of time.

Berger said that despite the countless honours he has already received in his career, recognition still matters to him. “It says that despite the nasty side of science, we are on a path that others recognise as beneficial,” he said.

The professor is no stranger to this “nasty” side of science. Following his discovery of Homo naledi, he and his team were accused of orchestrating a public stunt by allowing National Geographic cameras to capture their discovery and also employing six young women scientists for the discovery.

He, however, does not view this as a stunt, but rather an opportunity to inspire young girls to pursue science. “I am a firm believer that young girls and children do not often see women doing what they are capable of at the extraordinary extreme,” said Berger. He maintains that this has done an enormous amount of good.

This speaks to their quest to transform the sciences in order to bring in more young scientists from South Africa’s previously marginalised groups. Despite the great strides that have been made, Berger acknowledges that “what we haven’t done is equalise the career path and growth of women. We need to vigilantly work on that. We need to have women in the positions of leadership and power.”

As much as the Homo naledi discovery was a triumph not only for human evolutionary studies, but also for transformation in the sciences. However, there is still a long ways to go.

“We have not succeeded at all with black South Africans and black Africans,” said Berger. According to him, one of the biggest reasons for this is that his field of science is “invisible” to the majority of people. It is for this reason that he has always found it important to be open to the public about his discoveries like Australopithecus sediba and Homo naledi. Furthermore, it is relatively expensive to study the sciences and there is little pay for qualified scientists.

“But it’s not something you can’t just let happen so we’re doing things like working on making sure that we put naledi on public display. Somewhere in that audience is going to be the next generation of scientists and it’s not necessarily going to be a young, white kid,” said Berger.

Later this year, Berger will release the age of Homo naledi, which has also been the subject of a lot of controversy.