By Olwethu Boso and Nozipho Mpanza

Student protesters at Wits University were once again confronted by SAPS when they sought to mobilise students from nearby private colleges, leading to a clash of stun grenades and rubber bullets from police and stones thrown by students.

Today’s student fees protest follow a statement made by the university declaring a shutdown until Friday. The animosity between students and the police comes in the third day of the #Fees2017 mobilisation against the recommendation announced on Monday by Ministry of Higher Education Blade Nzimande that tertiary institutions set their own fee increases for 2017 at 8%.

A meeting took place at around midday at Solomon Mahlangu house where the students gathered to forge a way forward.

During the meeting, which was attended by about 300 students, the protestors decided to take the movement to Braamfontein and mobilise students at the private colleges around Wits.

The police threatened to open fire on the students if they refused to disperse. After failed negotiations between the student leadership and the SAPS, the protestors marched back to Wits campus via Jorisson Street.

Upon arrival at Wits campus, the protestors sang in front of the gate near Wits Theatre while the police formed a barricade in front of them. Soon after this, the media was told to move back as the police were about to disperse students. Seconds afterwards, they fired rubber bullets and threw stun grenades and smoke screens at the crowd of students who were seated in front of them. 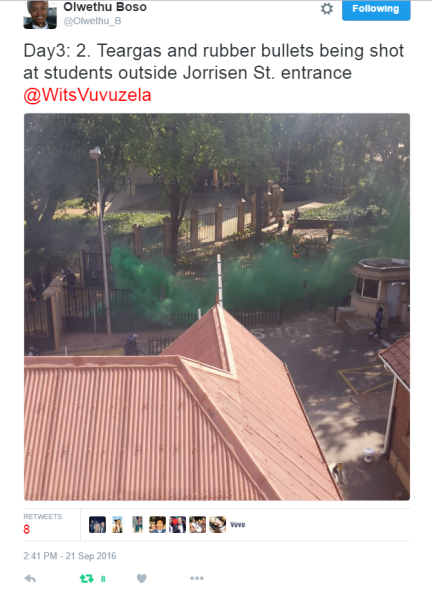 Screams could be heard as students ran into campus in large groups,trying to find safety. Many students sustained minor injuries during the chaos. 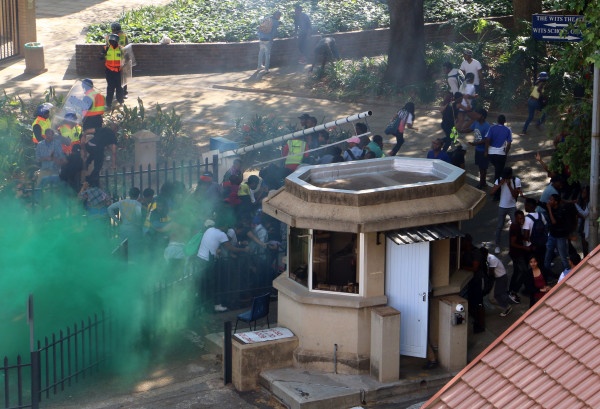 The next couple of minutes became a battle of rocks and rubber bullets between the students and the police which ended with police backing away as students had moved to the university’s other entrances. 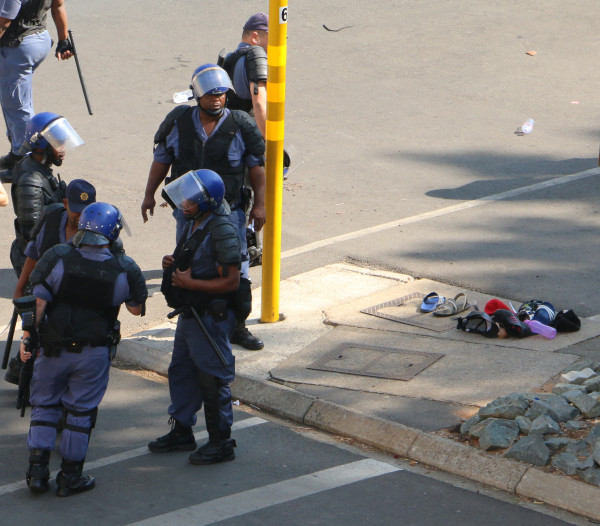 Some students were directly hurt by the rubber bullets and received medical attention. It is said that three students were badly injured and two were sent to hospital. The number of arrested is still unconfirmed.

The students will reconvene for a meeting this evening.