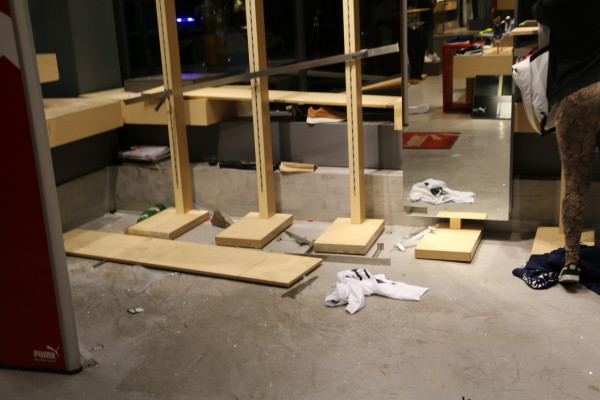 A group of people who joined the #feesmustfall protest that spilled into Braamfontein yesterday broke into Puma Store and stole some items.

The group stole bags, shoes, caps and other clothing items after they used rocks to break through a glass door.

Although police on the scene claimed they were students, several other eyewitnesses said they were homeless people and carguards.

This came after a group of students and #FeesMustFall leader Vuyani Pambo accompanied by members of the mediating committee went into Braamfontein to fetch some students who were struggling to return to Solomon House because of police action after the afternoon’s protest.

Earlier, there were violent engagements between the protesters and the police as police were firing rubber bullets and throwing teargas across Braamfontein streets in the evening.

Sinothando Mazibuko, second-year BA student at the University of Johannesburg told WitsVuvuzela that she was in her residence, a private facility called Times Square, when the police began firing teargas. “I was inside my room we were not even protesting but our building was fumed with teargas,” said Mazibuko.

First-year Social Work Wits student, Kedigetse Hlalethoa who was at the scene said the people who broke into the store were not students.  “Some of them were homeless people and car guards,” she said.

After the first rock was thrown through the glass, the group “celebrated, then they threw more rocks,” said Hlalethoa.

Mazibuko, who was also at the scene at the time, said the people who broke into PUMA and stole were people she has seen living on the streets. “There’s a guy I usually see on the street who was shouting ‘Viva Free Education’ and he is not a student,” she said.

Puma Store manager, Khaya Kubeka who arrived at the scene later said he could not estimate how many items were stolen but added that they will view the footage after the head office has released it.

“I’m very shocked and frustrated at the moment but I hope the culprits will be found and brought to book soon,” said Kubeka.

Incoming Wits-SRC president, Kefentse Mkhari said the delegation that was sent to fetch students in Braamfontein had already come back with students to Solomon House at the time of the incident. “The people who stole are opportunists pushing their own criminal agenda,” said Mkhari.

“The police and Wits management are the ones who pushed the protest outside Wits premises and therefore allowed the protest to be hijacked by criminals,” said Mkhari.

However, police from the riot van who later  dispersed the crowd said they believed it was students who broke in but they told WitsVuvuzela that they were not supposed to speak to the media.