Wits collaborated with mySOS to create a safety app that helps students and staff contact wits Campus Control in emergency situations. Witsies in emergency situations can now download a tailor-made app on their smartphones that alerts Wits Campus Control, sending them a location for immediate response and assistance.
Wits recently collaborated with mySOS app, a free emergency app for smartphones, to connect students and staff to campus security in a faster and more effective way.
Programme Manager at the Knowledge and Information Management Infrastructure and Operations (KIMIO) Projects Management Office, Tariq Surtee said mySOS was selected as the preferable application because it works well within the South African context.
The app, according to Surtee, waswas developed to suit the needs of students and staff of the Wits community
“It’s got some smartness built into it, it’s what they call geotagging, where we geotag the main campuses, wherever Wits campus control has a presence, so that they would be the first contact,” he said. The app, which requires data and airtime outside of wifi areas, operates on both Android and iOS.
Crime Prevention and Liaison Manager at Wits Campus Control, Lucky Khumela said that response rates should be quicker because the app serves to connect the Wits community to campus control, the police, and other entities like the Gender Equity Office (GEO). 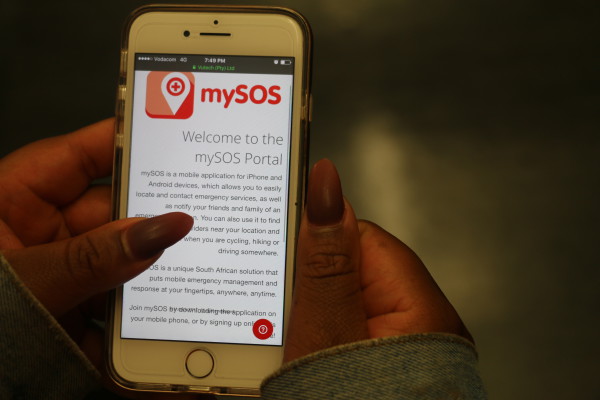 “If a call is sent out through the app, it doesn’t only go through the campus control office, but it also sends reports to different managers, just to make sure someone is accountable for the call activated by the app,” said Khumela.
First year BSc student Thato Molapisi said the app is a good idea, but questioned its efficiency in actual emergencies.
“If something traumatic has happened to you, and you need help afterwards, I think it’s a good idea to have the app so someone can come and help you, but I don’t think it’s a very successful idea to stop something in the moment,” she said.
Surtee said a “smart design panic button” can be bought separately, which, according to him will “figure your GPS location within a range of 40m”.
Lindiwe Ntsepo, second year, BSc Biology student said the fact that the app exists might deter people from mugging or raping.