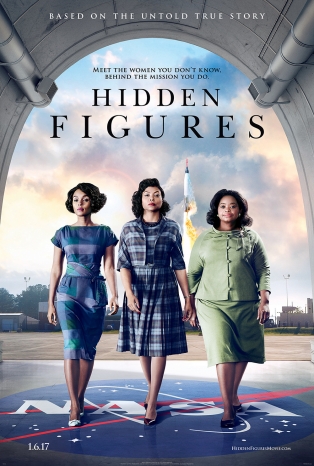 A fresh take on the history of African American female professionals who were geniuses in their respective fields of mathematics and engineering, ‘Hidden figures’ does justice to telling the story as happened.

Based on the true story of three African American women who broke barriers at the National Aeronautics and Space Agency (NASA), “Hidden Figures” unearths a history that has not formed part of mainstream science history.  Set in Virginia, North America, 1961, the movie tells the tales of Katherine Johnson, Dorothy Vaughn and Mary Jackson played by the award winning Taraji P. Henson, Octavia Spencer, Janelle Monáe respectively. The women, all mathematicians, were part of the segregated West Computing Group at NASA. They all worked together; until Johnson and Jackson were promoted to positions that often reminded them of the realities of being black and a woman in 1960s America.

Facing racial and gender prejudice from the beginning of the film to the end, the three refused to give up their struggle to prove their worth to all who doubted them.  Despite the focus on the lives of these women at NASA, the film is not short of the typical romantic and emotional twists and turns. In a romantic scene between Johnson and her then boyfriend, Mr Johnson, the latter finds himself in a puts his foot in his mouth, when he asks what Katherine does for a living. Explaining her role as a NASA mathematician, Johnson questions condescendingly, “They let women handle that kind of stuff?” Katherine retorts sharply, “Mr Johnson, if I were you, I would quit talking right now … I will have you know, I was the first Negro female student at the West Virginia University Graduate School. On any given day, I analyze the phenomena levels for air, displacement, friction and velocity and compute over ten thousands calculation by cosine, square root √ and lately analytics geometry, by hand. So, yes, they let women do something at NASA, Mr Johnson, and it’s not because we wear skirts but because we wear glasses.”

The minimalistic visuals corresponds with the narrative of the story, there is not much that is technically innovative in terms of the camera angles or lighting changes. However, the actors’ performances are effortless, including that of Kevin Coster, Kirstin Dunst and Kimberly Quinn. This is not unexpected because the film has been nominated for the annual Golden Globes and Academy Awards. It recently won the Outstanding Performance by cast members in motion picture at the Screen Actors Guild awards (SAGs). While receiving the award lead actress Henson said, “This story is of unity and this story is about what happens when we put our differences aside … Love wins.”

‘Hidden Figures’ is definitely a film that will inspire young girls to reach for the stars and beyond.  If you happen to have the time to watch the film, one can say that you will be in for an emotional rollercoaster ride.