Mpho Thando Sibeko, 23, started his acting career in the 2006 Lion King Production as the young Simba and now works alongside highly-acclaimed Hollywood actors. In 2016 he played Nelson Mandela’s eldest son, Thembekile, in the BET series, Madiba, and has had roles in South African series, 4play: Sex Tips for Girls, Rhythm City and Gauteng Maboneng. He is currently working on the second season of eTV’s Gold Diggers as Lucky Gumede.

When did you discover your passion for acting?
Honestly, I don’t know. As worn out as it may sound, I just found myself doing it. Growing up I’d dress up a lot, throw on a whole range of … I don’t want to say bizarre but … whatever outfit came together, had its own persona, although not once did I think I’d be an actor. I just ended up loving it in primary and high school plays and I’ve never looked back. It’s also hand in hand with the character Mpho is. I try to observe everything about people, the way they carry themselves, the manner in which they speak … the nuances they have. My love for psychology also plays a big role. It’s also just nice to lose yourself occasionally, step out of the real world for a sec or two.

Which has been your most challenging and why?

The fear of just not doing enough is already a challenge. I’ve enjoyed all my roles, but most challenging was ‘Mo’ the dim-witted jock [in Gauteng Maboneng]. The precision and technicality of comedy was challenging. On eTV the young boy I play goes through quite a lot with his family. Within 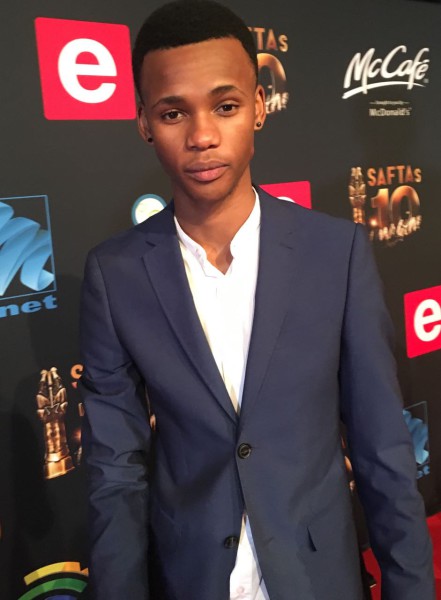 his growth and journey I find moments to reveal other aspects and sides of my other capabilities in the realm of the craft.

How did you overcome the challenge?

Let go of my nerves really. In one of the first supporting lead roles I was a bit star struck, I will admit. But I found my feet with the character, found my rhythm and timing and my co-actors were just brilliant, we kept each other on our toes and had fun.

What was the most outrageous role you’ve had to play?
A character named Tamora from a Shakespeare Titus Andronicus stage production which we did at school during our Experimental Festival. Boy was she feisty and devious, menacing, seductive… think Cruella de Vil. Walking in heels wasn’t easy but, hey, I had to work it. Don’t get me started on the hair, best weaves, I got a shock before every show, the transformation was unbelievable. And transformation evokes an even more exciting performance.

Which actor or actress do you wish to work alongside?
Will Smith, top of the list, the list is endless.

None that has been consistent throughout the characters, I don’t think I have, whatever quirky little things the character I play now says are always on the spot, and him being impulsive allows so much freedom.

If not acting, what would you have done?

I really do not know, I’m still shook that I’m actually achieving this far-fetched dream, but … I really don’t know.
Where to from here?
Wow, I wish I knew the answer to that because if it were up to me, the road to my first award, maybe an Oscar could be nice hey, but till then grow, learn and branch out even further in the industry and continue telling stories.

What was the biggest surprise you’ve had while working in show business?
I think BET’s Madiba, it was all I could dream of and it happened, [working with] Hollywood actors Laurence Fishburne, David Harewood, Orlando Jones and more, our very own actors, Terry Pheto, Hlomla Dandala, Meren Reddy, Lerato Mvelase and so many more … [being] directed by Prison Break director Kevin Hooks. The humility on that project was quite astounding but made the experience even more memorable. What really left me stunned when I arrived was having my very own trailer. I sat there in silence literally losing my mind. It was unreal, I still can’t believe it happened and so soon!

One thing you miss from life before entering show business?
I miss watching and enjoying films and TV series without being analytical about technical issues or performances.

What would you tell the 18-year-old you?
Slow down and enjoy this childhood thing, it’s going to be legitimately over very soon.