Fees Must Fall leaders and activists, journalists and students reflect on the discourses and reports surrounding 2015/2016 #FMF protests.During the 2016 Fees Must Fall protests, the media ended up acting “like a post office” delivering messages between university management and protesting students.
This is the view expressed by Wits SRC president, Kefentse Mkhari, at a seminar hosted by the Wits Journalism department on Wednesday, March 1. Titled How 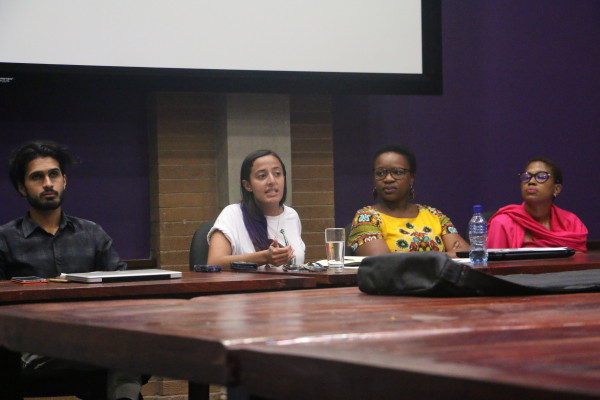 the media covered #FeesMustFall 2016, the seminar was attended by members of the Wits community, #FeesMustFall leaders and representatives from different media houses.
The proceedings kicked off with a presentation by Masters candidate, Doreen Zimbizi, which compared the mainstream media and alternative media coverage of the 2015 #FMF protests.
Deputy Vice Chancellor Tawana Kupe said the media had failed to contextualise the protests as part of a bigger issue of higher education funding, which was a challenge for nations in all continents.
Sikelelwa Mdingi, a reporter for eNCA said what people were not aware of was that as reporters they also got scared because often they were caught up between police rubber bullets and protesters’ stones.
The challenge for editors, said Omphithletse Mooki of The Star, was in determining the true facts as often other media outlets had accounts that didn’t coincide with those of their own reporters on the scene.
Representing alternative media, Mohammed Jameel Abdulla of the DailyVox was unapologetic about being biased in favour of protesting students.
Leader in the #FMF movement, Fasiha Hassan, conceded that divisions among leaders of the movement were part of the challenges the 2016 edition of #FMF faced, as was the difficulty in being part of the SRC and being seen as not representing the interests of non-protesting students.
The panel concluded that all media made use of alternative news-sourcing methods to cover the issues, giving students the opportunity to tell their stories.
Zamayirha Peter, a Wits journalism honours student and SRC leader, said the seminar was thought provoking and a space to reflect on what actually happened during the movement.
“As a student leader or as the #FMF community, if I can call us that, we didn’t really get the opportunity to debrief or to have an in-depth analysis of what happened,” said Peter.