Kenyan author Ngũgĩ Wa Thiong’o, often termed the founding father of decolonisation discourse, had a packed Wits University Great Hall audience enthralled by his lecture last Thursday evening. Entitled “Secure the Base, Decolonise the Mind”, Wa Thiong’o,  used the platform to show how African languages have been “excluded in the educational system.” He described a conditioning experience of a child in primary school who receives corporal punishment for speaking in his or her mother tongue. “One set of language was associated with shame and defeat, whilst others were associated with modernity, science and success,” he added. 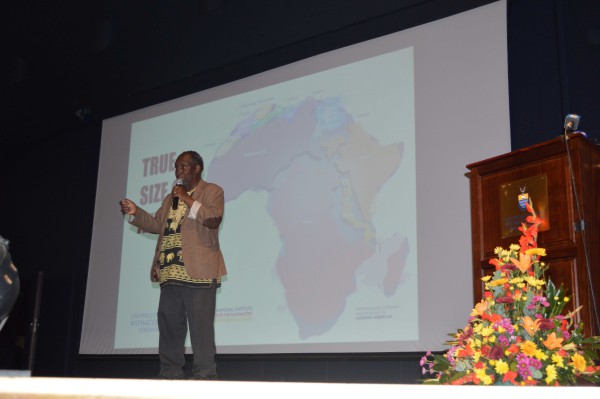 “It can know many languages in the world but if you don’t know your mother tongue, it is enslavement.” Thiong’o #ngugipubliclecture

African Literature Masters student, Simamkele Dlakavu, responded to Ngũgĩ’s lecture by touching on the structure of the Wits curriculum and her own experience with post-graduate study. She recalled an instance during her research where she had to translate a text in isiXhosa to English and felt this marginalised her culture.

LLB 4TH year student, Phyllia Ngoatje who attended the lecture, said that she enjoyed the event because it focused on language. “I think that the curriculum needs to be changed. We need to start like learning about African Literature and African heroes,” she explained.

Nqobile Tshezi, Honours in Sociology did not share these sentiments. “I felt like he simplified that process and over emphasised language and how we are assimilated through language. Even if I wanted to go back and embrace my isiZulu culture it won’t happen in a day,” she explained.

Wits Journalism Lecturer, Dr Bob Wakesa, who also attended the lecture, believes that decolonisation is indeed possible in our current educational system. “I think the starting point is to take radical steps in changing curriculums by looking closely at the link between education and societal needs,” he said. Wakesa believes that universities can develop courses and learning materials that “address our educational needs”.