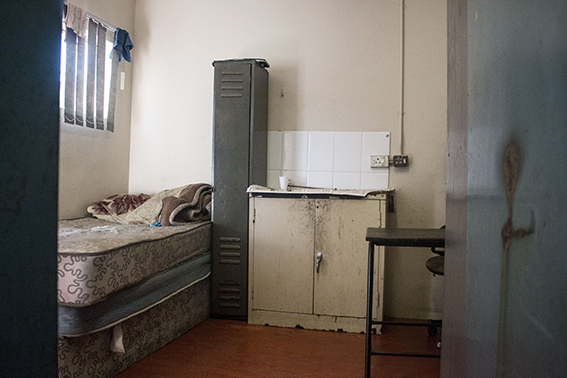 Drivers of the buses that shuttle students around campus, say they are forced to sleep as many as eight per room in a cramped and unsanitary conditions. Photo: Ntando Thukwana

BUS DRIVERS employed by Wits University service provider, Phola Coaches, are living in cramped and unsanitary conditions in staff rooms provided for them on the institution’s main campus in Braamfontein.

Wits Vuvuzela visited the rooms last week which are used by about eight to 10 drivers per room, in a space of approximately 5×5 metres with limited ventilation. The men sleep on the floor on mattresses which are stacked on top of each other and stored against the walls during the day to make space to move around the room.

Some of the drivers, most of who are from Mpumalanga and cannot travel home after their shifts, choose to sleep in their cars rather than in the staff rooms due to the cramped conditions. “…We really don’t sleep well,” said Johannes Themane, one of the drivers.

The drivers claim to have had several meetings with Phola Coaches’ management in an attempt to reach a resolution on the matter. According to the drivers, Wits requires a formal letter from the service provider to secure accommodation.

“In the meetings we’ve had with Phola, we asked Phola to write the letter and send it to Wits, but they refused. They don’t want to write that letter for us,” said Themane, together with the other drivers who did not want to be named for fear of losing their jobs.

The drivers believe that Phola Coaches is at fault, but say it is necessary for Wits management to get involved as the company transports Wits students. Wits Acting Director of Services, Nicole De Andrade, said, “This matter has recently been brought to the attention of the university and is currently under investigation.”

Phola Coaches management has refused to comment on the matter and directed Wits Vuvuzela to Wits management.