With a beer in one hand and their ideas in another, students grappled with social and economic issues on the continent.

A number of different Wits University political groups found themselves sharing the floor at the annual ReThink Africa debate this week. The debate, hosted over a round of beers at the Wits postgraduate pub on Tuesday, April 11, as part of the Africa Week programme hosted by the Wits School of Arts (WSOA).

Palomino Jama, 3rd year Media and International Relations and the SRC’s All Faculty chairperson, felt that the beer debate brought about about some unity amongst the different, and normally opposing groups. “Ssometimes you’ll see an EFF person, a PYA person and a PASMA person agreeing against their party mates but based on ideological point of view,” she said.

“I enjoy these things because you find that you have more in common than the opposition which is refreshing for me,” Jama added.

Some of the topics debated were whether or not government should prioritise township economies and whether men can be feminists.

Yamkela Fanisai, chairperson of the ANCYL, said that he found that alcohol was an effective stimuli for engaging debate. “The issue of alcohol being there and us debating and doing that fruitfully, it was very impressive for me. To me, alcohol makes me to think more articulate.” 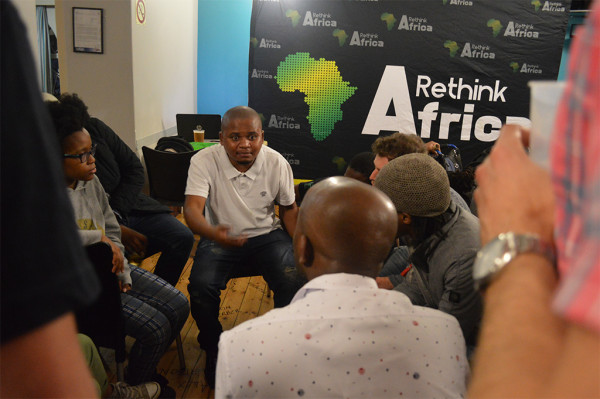 One group of students engage in discussions for the debate topics. Photo: Karen Mwendera.

MSc Biochemistry student, Ilan Kirkel echoed Jama’s sentiments about the beer: “I feel like it changed the whole environment to the discussion. People get to talk about how they really feel, but also have a good laugh about it”.

“It’s a way to smash together two things Witsies love: being smart and having fun. It’s an intellectual turn up!” said Bandile Ngidi, the director of ReThink Africa.