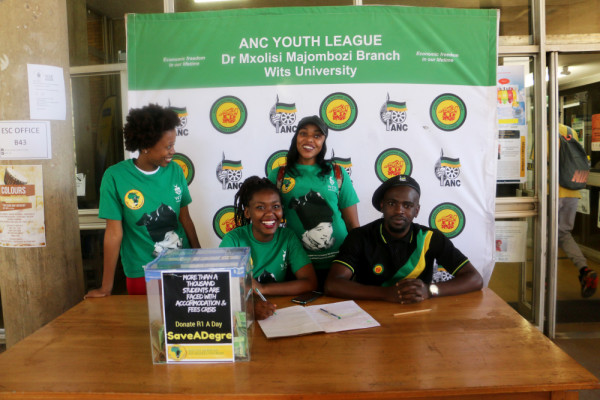 A fundraising initiative by the South African Students Congress (SASCO) on the Education Campus, has been relaunched following concerns about the management of the initial campaign.
The #SAVEADegree initiative was initially launched on March 7 this year and managed to raise about R3 000 before it was suspended just three days later after questions were raised about the management of the funds. On Saturday, April 8, the campaign was relaunched after SASCO addressed the concerns raised by the office of Student Governance. Senior programme adviser for student governance, Jabu Mashinini, said SASCO had failed to submit a formal proposal with a clear indication of a cash management plan.

The #SAVEADegree public relations officer, Nombulelo Malaka, said SASCO was not aware of the extent of the process in starting such a campaign nor that SASCO was required to submit a detailed proposal to Student Governance. Ahead of the relaunch of the campaign, Malaka said SASCO had submitted the required proposal highlighting their intentions and aims of the campaigns as well as new ways of safekeeping the funds raised.The School of Education (WSoE) is also now involved in the campaign by providing administrative support to keep safe the funds raised. “The campaign is fully supported by the finance team in the school and they will assist the campaign team with management of the funds, including control and custody of the funds,” said Misheck Ndoro, WSoE finance and business manager.

Malaka added that the money collected would be taken to the Fees Office on a monthly basis, where it would be counted with a university staff member present. “We have also ensured that the box is well sealed and will only be opened for purposes of counting the money once every month,” she said.Malaka says SASCO is currently accepting physical donations mainly at the education campus bus station, however, they are trying to find ways to extend to other campuses as well as creating a savings account where people can deposit money.

SASCO chairperson Smanga Nhlengethwa said that SASCO hopes to raise funds that will cover the value of a student’s degree, which he considers to be inclusive of “tuition, textbooks and accommodation”.The campaign hopes that through collective contributions from staff, students and willing organisations, the reality of students at Wits will be changed one by one.