The Clever Boys were sitting second on the Absa premiership log with 45 points, just one point behind this season’s surprise leaders, Cape Town City before last night’s match. However, the loss has seen Bidvest Wits slide to third place on the log, this due to wins by the league leaders Cape Town City and Mamelodi Sundowns. 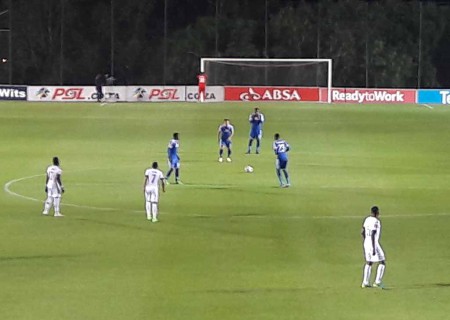 Supersport United scored in the second half.  Photo: Juniour Khumalo

Hunt’s changes seemed to have brought with them a lot of positivity as the home team had most of the ball possession in the first-half, but a lot of wayward shots from free-kicks and corner kicks saw the first half ending goalless.

Wits started off the second half the same way they ended the first half, creating numerous opportunities that were not taken by the home side’s wasteful attaching pair of Malawian international Gabadinho Mhango and Eleazer Rodgers. Both players were eventually replaced in the 59’ and 69’ minutes respectively.

Just as the game looked as if it would end in a stalemate, SuperSport winger Thuso Phala put the visitors ahead after a counter attack that saw the winger place a cheeky chip over veteran keeper, Josephs.

A visibly frustrated Hunt could be seen barking instructions to his team, however, the home team’s efforts towards getting an equaliser were in vain as SuperSport United players resorted to time wasting tactics. This resulted in players such as Thabo Mnyamane being stretchered off in the 88’ minute.

With two games in hand over the league leaders, Bidvest Wits still have a good chance of winning their maiden premiership title, provided they win both their games in hand.