Witsie Chanel Stevens is making a name for herself as a brainy beauty queen, dance teacher and karate instructor. 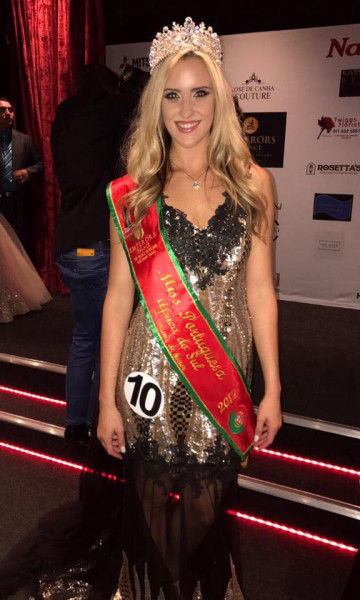 Wits Vuvuzela caught up with Chanel Stevens, a four-time beauty pageant winner and Miss Portugal South Africa 2017 second princess. Currently studying for honours in human genetics at Wits, Stevens shows that she is much more than a pretty face, with plans to become a paediatric surgeon or neurologist. At just 21, Stevens is making a name for herself as a beauty queen, dance teacher and karate instructor and aspires to compete for the Miss South Africa crown.

Why did you choose to study human genetics?

I chose to do my honours in human genetics because I am fascinated by what makes us who we are and by how we are all so uniquely diverse. This would allow me to pursue a career in genetic counselling but, for as long as I can remember, my ultimate goal has always been to become a doctor, perhaps a paediatrician or a neurologist, so that I may help those in need. I intend on entering the Wits Graduate Entry Medical Programme in order to follow my dreams.

When and why did you start competing in beauty pageants?

I did my first one when I was seven, I think. I did Mini Miss Portugal. As a child my mom entered me, then I kind of enjoyed the whole experience and it just happened randomly after that, for example we went to the Spring Fair at Rhodes Park and that’s where they held the Miss Kensington pageant so we just decided to enter and I won. I love an excuse to get all dolled up and glamourous, to meet new and diverse people and to challenge myself by participating in something that is out of my comfort zone.

What attracted you to the Miss Portugal South Africa pageant and what does it represent for you?

Well, when my mom was my age, she entered it and she was in the finals. Just hearing her experiences and the way she spoke about it was very positive, so I thought why not try it out and fulfil the legacy. I was going to compete last year, but my dad passed away so I competed this year. I’m also very passionate about being Portuguese and it was a way for me to represent my community and empower younger people who need role models and inspiration. This pageant represented the opportunity for me to get involved in the community, to better my Portuguese and the potential to travel to Portugal to represent my country and experience the culture there.

What are some of the stereotypes you face as a young woman competing in beauty pageants?

It’s the preconceived idea that it’s about the shallowness of beauty, but it’s not about beauty anymore like it was traditionally. We do so much more, like for the Miss Portugal pageant, we visited old age homes and soup kitchens. It’s also really about bettering yourself as a whole, for example there is a sports section and a focus on healthy living and eating right. I think in terms of stereotypes I’ve never actually had any negative experiences, but I think on the whole we don’t get taken seriously because we are not seen as smart individuals. As women we are seen as vulnerable but we aren’t because the pageants are all about empowering women.

Who is your biggest inspiration and why?

Rolene Strauss is definitely my role model. She competes in pageants and she’s also studying medicine, but she’s able to handle all of it. Watching her compete in Miss South Africa was inspiring and amazing and it’s become my dream to compete in the Miss South Africa pageant. It’s not set in stone, because we don’t know what could happen in the future, but I’d like to use these pageants now as practice rounds for Miss South Africa one day.

What does getting ready for a pageant entail?

It’s not as glamourous as it sounds, it’s actually quite chaotic. You have people all around you doing your hair and your make up, but the atmosphere is exhilarating. Getting ready for a pageant is really about working on and bettering oneself. Exercising regularly and eating healthy is the obvious preparation because feeling good about yourself influences how you present yourself, in terms of confidence; poise; stage presence; and communication with others. Essentially, attaining a positive mind-set is imperative. In the Miss Portugal South Africa pageant in particular, improving my Portuguese was vital prior to the competition.

How do you balance studying and competing?

It can be quite hard, for example for the last pageant I had to take a week off from university because we had to stay at Emperors Palace for that week, so I had to call all my lecturers and ask them if I could catch up on the work when I got back. It’s really important to prioritise and my studies are my first priority, so I actually took my books with me and studied while I was there. It can also be hard to balance studying, teaching dancing, karate and au pairing, but I think it’s important to keep motivated, preserver and definitely to prioritise.