The fifth Varsity Football season kicked off in a festive atmosphere at a launch hosted by 5FM at the SABC Radio Park parking lot on Monday, July 24.

As the official media sponsors, 5FM extended an invitation to representatives from the eight universities taking part in this year’s Varsity Football competition.

This build up to the official kick off on Thursday, July 27 was attended by coaches and a few team players from the University of the Witwatersrand and the University of Johannesburg along with a handful of their supporters. 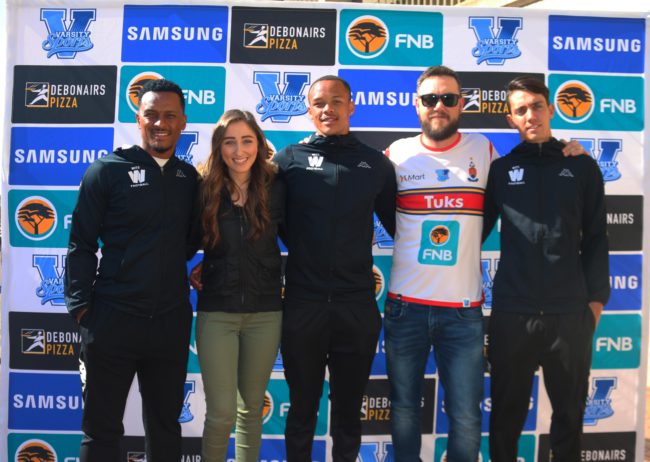 Michael Varney Marketing Executive at Varsity Sport reiterated Cullinan’s sentiments as he said, “5FM is to radio and to music what varsity sport is to sport and entertainment. We are both youth focused brands and it’s a fantastic partnership we have.”

Varney went on to say that Varsity sport sees Varsity Football as one of their biggest properties hence they are expecting great turnouts throughout the various university stadiums.

On the day, other sponsors for this upcoming season were unveiled which include Debonairs pizza, FNB and Samsung who will be randomly giving out prizes throughout the season at the various university stadiums.

The Wits contingent made up of the team coach Mark Haskins, central midfielder Tristan Gatter and centre back Jordan Green expressed their excitement as well as their expectations for the upcoming season.

“I feel confident with the line-up of players at my disposal. They all have great ability and winning the Varsity Football tournament is really up to how much they want it,” said the Haskins.

Gatter said, “This year we have a much stronger group of players than last year and a lot of the players are doing their final year so we would want to make it a memorable year for them by winning the tournament.”

While Green highlighted that he “did not believe in luck but preparation” and the Wits team according it him had no off season as they continued to train twice a week during the university holidays.

Green also said he “expected the team to grind out a victory on their first game of the new season against UWC Football on Thursday July 27 at UWC Sports Stadium, Cape Town.