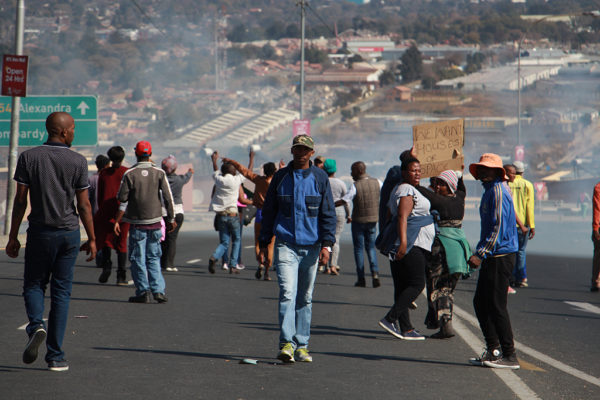 University spokesperson Shirona Patel said, “The proceeds from the development of the land will be used to benefit students from disadvantaged backgrounds. Wits University needs to address and remove the financial barriers faced by academically deserving students from underprivileged backgrounds.  The university thus seeks to earn an income from the development to ensure that no student who qualifies academically is excluded from a university education due to financial barriers.”

Patel added that the City of Johannesburg and the Gauteng province will be looking at the proposals submitted by development bidders.

“The university has asked all development proposers to take into consideration the close proximity to Alexandra to ensure that proposals include affordable accommodation for low-income South Africans, as well as the provision of job opportunities,” she added. This follows ongoing protests by Alexandra residents wanting to occupy the Wits land.

In an interview with Business Day on July, 11 2017, Wits Vice Chancellor Adam Habib had indicated the ongoing plans of the university to lease out two properties in central Johannesburg, as well as an open bid to the Frankenwald land.

“Our big plan is to develop it [Frankenwald] together with public and private partners to get annuity income hopefully in the region of R100m a year, which down the line we will deploy for students,” Habib said.

Patel further told Wits Vuvuzela that the university had made a commitment to sourcing more buildings and extending existing buildings including Barnato Hall by 110 beds as well as David Webster Hall by 113 rooms as from the 2018 academic year.

Lesley Ramutlwa, a Wits student from Alexandra, indicated that he agreed with the plans of the university. “This model of using university assets to generate income that will cover social cost is the best.” Ramutlwa also said that he believes “Alex residents are entitled to raise questions but targeting Wits won’t solve their housing challenges. They must direct their anger to government. They [Alex residents] want to punish the buyer not the seller which is government,” he added.

Speaking to Wits Vuvuzela, Alex community leader, Thabang Lediga said, “People of Alexandra need that land for human settlements and anything outside that is not addressing the situation in Alex and should not be seen as a priority. We sympathise with the shortage of accommodation by Wits but we need not convince anyone about the situation in Alex. We are planning to visit Wits, City of Joburg and the Gauteng department of human settlements to highlight the importance of housing in Alexandra which they might have forgotten.”

Patel says the university and the City of Joburg will, through its Communication and Community Liaison unit, “engage with all affected communities in the near future”.