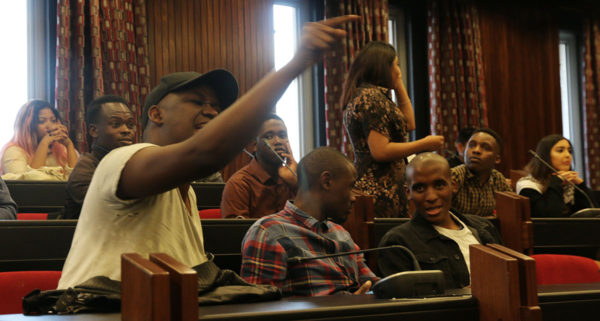 Students including members of the Wits Students Representative Council (SRC) disrupted a business indaba that was hosted by the Democratic Alliance Students Organization (DASO) at Solomon Mahlangu House on Thurday evening. The indaba was stopped after students screamed and heckled at Johannesburg mayor Herman Mashaba just after the panel discussion began.

Mashaba was escorted out of the venue after audience wanted to engage the mayor on issues regarding xenophobia as well as evictions that were orchestrated in the Johannesburg CBD.

“I came here expecting a constructive talk I was hoping to get some good details. I understand there’s lots of issues around Mashaba and immigration but it’s as if they [the students] did not want to be listened to. They just disrupted and turned it into chaos,” said Paul Stansell, an Astrophysics student and entrepreneur .

University of Johannesburg student Tebogo Seloane, said they were not disrupting, they were simply asking the mayor questions. Adding that “We didn’t get answers. He (Mashaba) ran away.”

SRC deputy president Noluthando Zuma, says she was disappointed that the mayor left without answering important questions around evictions, accommodation and xenophobia.

Zuma added that, they wanted to engage Mashaba as the mayor of Johannesburg and not in his capacity as a businessman, because they did not have any other platform.

The panel consisted of entrepreneurs from various industries who urged the students to remain disciplined however this was ignored and led to more shouting from the audience. The business indaba was aimed at addressing entrepreneurship in the student community.

DASO chairperson Yanga Damane, said they were very disappointed in the SRC and they felt very disrespected. The chairperson said they made a lot of sacrifices and haven’t been sleeping trying to ensure that the event was a success, adding that some people traveled long distances to be part of the programme.