Students put their foot down against cancer

The CESSM placed much importance to a healthy living as they hosted a walk/run as part of a cancer awareness initiative.

The Centre for Exercise Science and Sports Medicine (CESSM) hosted a fun walk and run for cancer awareness. The 5km run or walk were for The Cancer Association of South Africa (CANSA) awareness at Education campus On Wednesday August 2. 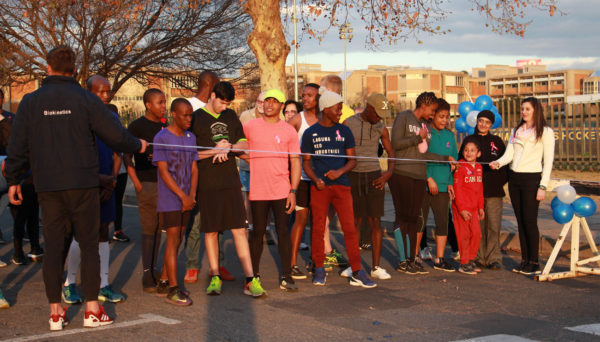 FIT FOR ALL: Students and members of the public joined in the fun as they set foot on the starting line

This was the first time that the CESSM held this initiative to bring awareness about cancer and to also motivate students to get more active.

In an interview with Wits Vuvuzela, Biokineticist and event organiser, Erin Karam, said that it is only fitting for a centre that prioritises a healthy lifestyle to host this kind of event. “We just thought, you know what, let’s make it a run. Let’s tell people to get out there and get active,” said Karam.

The main goal to support this initiative was to get people donating towards a bigger cause that is very important. “We want to raise money for cancer”, added Karam.

The CESSM was assisted by the biokinetics honours students who put in much effort to make sure the day was a success.

“The students and our interns really helped bring this all together by staying late, to just help with making boxes, or fold things and even finding out where we could print stuff,” said Karam.

Biokinetics honours student Jessica Davies said, “Cancer is a great cause to support because it does not just affect those suffering with it but their families and friends too”.

Davies told Wits Vuvuzela that supporting cancer in a way that gets people to exercise is a great motivation for those who are victims to this disease.

Many students came out to support this initiative, not only to be a part of something fun but to also get fit in support for an important cause.

Second year civil engineer and metallurgy engineer students Noluthando Zitha and Monica Basi, told Wits Vuvuzela that even though the course was tough on them, they had fun because it was an important event to put effort into.

“I believe in the quote that says ‘to those whom much has been given, much is required’,” says Zitha.

The CESSM collected old sports clothes as well as donations which they will be giving to their various charity organisations.