Wits Development and Leadership Unit hosted a panel discussion centered around #MenAreTrash and solutions to the challenges women face. 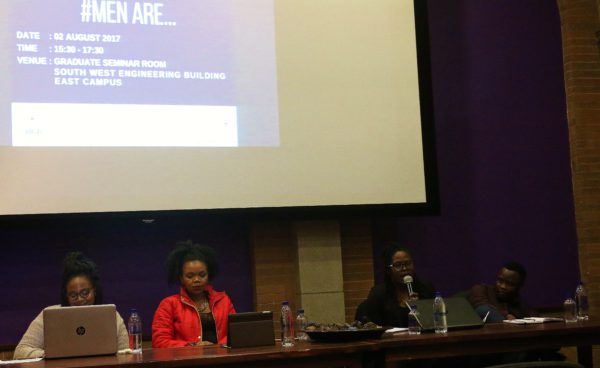 #MenAreTrash, the hashtag which rose to prominence on social media earlier this year after a surge in gender-based violence, was at the centre of a discussion hosted by the Wits Development and Leadership Unit on Wednesday, 02 August.

The event, entitled #Men Are …, looked at solutions to the challenges faced by women in society. The panel, which consisted of feminist and social activist Sarah Mukwebo, author and social activist Malebo Sephodi as well as Nomalanga Ngwenya and Sidwell Sehoane from Agisanang Domestic Abuse and Training (ADAPT), agreed that the patriarchal society was at the root of the problem.

They did not agree, however, on the use of the hashtag or how the challenges women face in society should be resolved.

Mukwebo initiated the dialogue by explaining that a patriarchal society teaches “people to put men above women”.

She added that when women called men trash using the hashtag it gained prominence over a multiplicity of other available hashtags because it directly targeted the heart of patriarchy.

Ngwenya and Sehoane suggested an all-inclusive approach to breaking down patriarchy and addressing issues such as gender-based violence.

Ngwenya and Sehoane work with men to confront violence against women at ADAPT, where their work extends to rehabilitation and education programmes in prisons.

“Yes men are trash, but where do we throw them? There’s no dustbin,” said Ngwenya.

On the subject of the hashtag, Sehoane, the only man on the panel, said “negative things gather a lot of attention”.

Men became defensive to #MenAreTrash as a form of intervention, he explained, because “we as men cannot allow a hashtag to define us”.

It is important to recognise that all behaviour is learned, he said.

He suggested that positive spaces need to be developed where men can unlearn patriarchal behaviour and reinforce what society needs.

Using himself as an example, he said that “men are brought up in a society where abuse is part of their lived experience”.

He suggested that communities come together so that men and women can dismantle male privilege through conversations and workshops where men can unlearn patriarchal behaviour.

A member of the audience,known only as Tumelo, agreed that safe spaces for men should be developed in order to deconstruct privilege. But, he suggested that men also have these conversations on their own.

Mukwebo and Sephodi agreed that in tackling patriarchy, women should not do all the work.

“It is not the responsibility of the oppressed to teach the oppressor, so it’s not for women to teach men how to treat them,” said Mukwebo.

She added that it is difficult to present solutions for something that is deeply embedded in society. “Even the state is patriarchal in itself so it leaves women’s issues at the doormat. How can solutions come from them?” she asked.

She also pointed out that some solutions, like the rise in pepper spray and Taser sales, are exclusionary. “A poor woman cannot pay R500 for a Taser, nor can she afford an Uber as a safe form of transport.”

Male privilege should be challenged, said Sephodi, because at the moment there is no social cost for the violence they commit.