EFF leads no confidence march in Braamfontein and Johannesburg CBD.

By Patricia Aruo and Kayleen Morgan

The EFF shut down businesses and barricaded roads around Braamfontein and the Johannesburg CBD this morning. This was one of the nationwide protests in support of the motion of no confidence vote against President Jacob Zuma tabled in the national assembly in the afternoon.

Protests began at the intersection of Bertha and Jorrissen streets in the early hours of the morning. The protesters reconvened later, just before 10am, and proceeded to march through Braamfontein and to force stores to close.

Wits EFF student leader, Koketso Poho, was one of the leaders of the march and told protesters that the plan of action was to close businesses but not to loot. 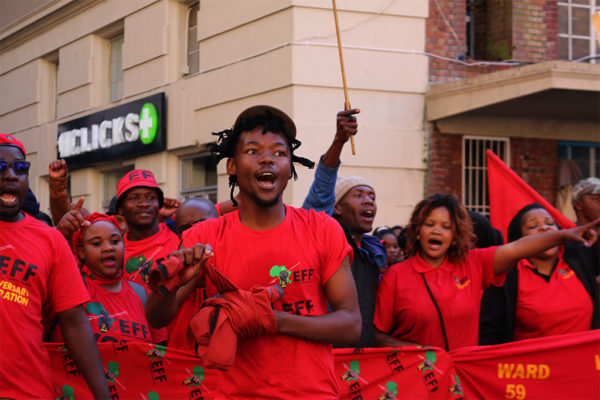 Protesters ejected customers from Double Shot, a popular coffee establishment. A member of the South African Police Service who was on patrol, told Wits Vuvuzela that the protesters  had “a democratic right to protest, but they should do so peacefully”.

The protesters marched into Park Station where they continued to shut down businesses before police arrived and escorted them off the premises. Poho addressed the crowd outside the station, saying, “We are not here to loot, we are here to shut the inner city down.”

Confrontation between police and protestors as they try to move them off the premises. @WitsVuvuzela #NoConfidence pic.twitter.com/zMQuaPduS6

While making their way to Joubert Park,where an EFF mass gathering was to be held in the afternoon, a physical altercation broke out between protesters and a shop owner who was resisting attempts to close his shop. Police who were monitoring the protests intervened, and the protesters moved on.

Police breaking up an altercation between a shop owner and protestors. @WitsVuvuzela #NoConfidence pic.twitter.com/UVrkL47ntm