Empathy “the key” to problem solving 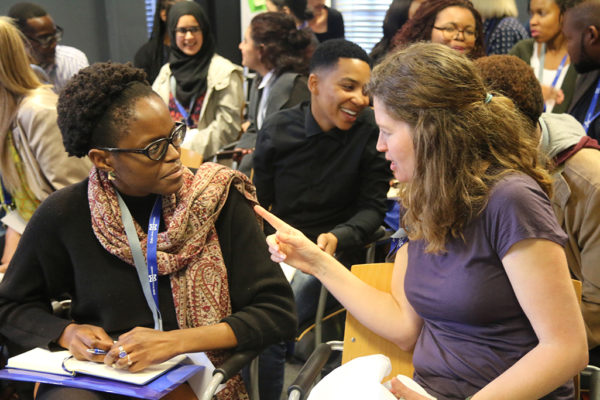 Audience members have a discussion during the Leadership Roundtable which was based on human collaboration.

‘DESIGN THINKING’, which is centred on the human trait of empathy, was introduced as the future of problem solving at a leadership roundtable discussion at the Menell Media Exchange (MMX) on Friday, August 11.  The MMX conference is a Duke University initiative which aims to create an effective  media community through forums, workshops and fellowships. The discussion was hosted by Darryl Wright and Karen Roux from Duke Corporate Education.

According to Wright, when people are presented with a problem, their first instinct is to solve the problem quickly. This may include using technology to try and resolve problems. However, Wright said that, it is human characteristics such as empathy that cannot be digitised, that will become more valuable.

“Our existence as humans is framed by connectivity. Without a sense of belonging, we down spiral,” Wright explained. Because of this, he encouraged people to embrace technology, “but don’t become it”.

Future academics, journalists and business owners need to solve problems by placing themselves in the shoes of the target audience that any product is being produced for, according to Roux. “People need their interactions with a product to be simple,” she said.

‘Design thinking’, is an approach which assists in creating a healthy environment that will boost creativity and innovation. Wright said that empathy is the basis of ‘design thinking’ as it allows one to see the world through someone else’s eyes when producing a solution (product) to a problem.

Wright explained that the process of ‘design thinking’ involves “immersing, observing and engaging” with the target audience in order to explore all the details of a problem before solving it.

to shape culture and was therefore a relevant element of education, journalism and leadership roles, among others.

“You want to design something that will be useful to people, and so the user experience at every touch point with your product is the most important.”

Wright concluded that empathy includes human collaboration, which is vital, and “empathy is key to unlocking it.”