The SPOKESPERSON of the National Student Financial Aid Scheme (NSFAS), Kagisho Mamabolo failed to arrive for a talk that was billed to answer students’ questions about 2017 funding problems. 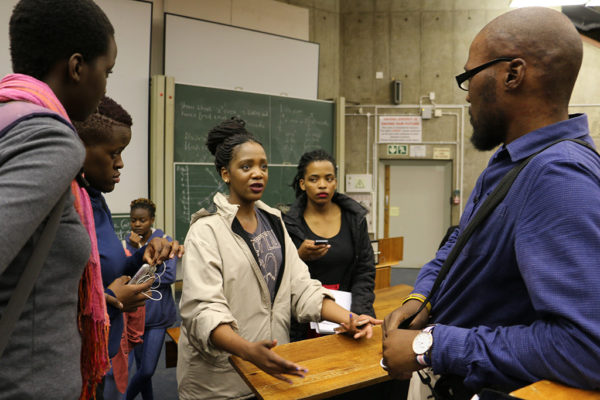 Hosted by the Wits School of Social Sciences Student Council, the #NSFASCrisis talk on August 29, promised “one on one” consultations with Mamabolo.

About 60 students turned up at the Oppenheimer Life Sciences Lecture Hall 1, only to be told by the deputy chairperson of the student council, Lesego Letswalo, that Mamabolo had cancelled his attendance for fear that it might lead to protests on campus.

According to Letswalo, a lack of funding from institutions outside of Wits and NSFAS is a problem for students studying in the social sciences department, particularly those studying towards a Bachelor of Arts. “The spokesperson for NSFAS not attending the talk is an act of bad faith because we co-operated with NSFAS.

“We circulated a list of students with issues pertaining to NSFAS, and we can safely say that we are sitting with a list of about 200 students that have a problem with NSFAS,” Letswalo said.

Wits SRC treasurer general Thando Mntambo said she was available to assist students with any administrative difficulties they were facing with applications. She also encouraged students to make use of the councils. “School councils are there for you. They communicate directly with the SRC,” she said.

Worried that he may be financially excluded in 2017, first-year BSc Chemical Engineering student, Kevin Maake, told Wits Vuvuzela that his number one priority for this year is to secure funding.

“I applied for NSFAS and received an email confirming that I was accepted, but I did not receive funding. I called NSFAS and they told me that the university was supposed to send my academic transcript, I then went to Solomon Mahlangu House and I was told that it was sent to NSFAS in February. I called NSFAS again and they told me that the Fees Office did not get back to them. It feels like I am circulating in one place,” he said.

The council had hoped that the #NSFASCrisis talk with the NSFAS spokesperson would provide students such as Maake with answers as the end of the academic year approaches
“No responses, disappearing of applications, students unaware that they’ve been rejected, means students keeping on going to the Financial Aid and Fees Office…” was a common thread in complaints received from students, said Letswalo.

“As the council we have to sit down and start thinking of a way forward with all the problems that have been brought here today,” she said.

Wits Vuvuzela made various attempts to get comment from Mamabolo, however, he had not responded by the time of going to print.