Junction beat Steinhof Pearson 37-5 in a one-sided game played during a cold, windy Johannesburg night. The Junction team was set to play former champions, Steinhoff Titans, who had had a successful season, losing only once to the newly crowned champions, earning themselves a position at the top o the log. 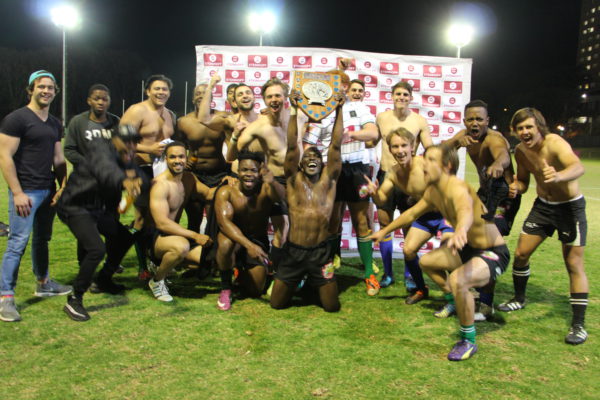 The Titans, however, were disqualified from the finals after the organisers discovered that they had fielded a non-Wits player in their semi-final game against Steinhoff
Pearsons. League organiser, Ntsikelelo ‘Amigo’ Ngcakana, said, “The guys know the rules. The rules are simple, you must either be a student at Wits or player for the club.”

Steinhoff Pearson, a rugby team from the Pearson Institute of Higher Education, were the beneficiaries of the Titans disqualification, and ended up participating in their first ever final.
The Midrand team struggled throughout much of the game as they managed to score just one try with no conversion. However, they had the biggest support in the stands, as their fans came out in numbers to support the side.

Pearson coach Barry Nkosi was disappointed with the loss but very proud that his team was able to do so well in the league. “We had a lot of guys with size but we lacked in terms of fitness and our defence pattern,” he said. He added that, “The team showed heart, to think that we were the underdogs, being a small university on the other side of town coming in and contending at Wits
University is really a proud moment for me.”

It was Junction who impressed throughout the game, scoring a total of five tries to claim a convincing victory. Junction had a successful season in the league as they won five games and only lost one, which left them second on the log with 23 points prior to the semi-finals. The residence team were the favourites to win, as they were already 10 points ahead of Pearson in the group stages. Junction player-coach, Victor Mongwe, expressed his delight at the side’s win. “I’m very excited. It is kind of hard to believe, but we came out here and made history. It really is the best feeling.”

Mongwe was very pleased with his team’s performance throughout the league saying, “The boys were on their A-game…We really learned how to play as a brotherhood which makes it easier for us to achieve things like this.”

The Junction team has now earned itself a spot in the 2018 Steinhoff Koshuis Rugby Competition.