Sibusiso Nkosi, a Wits Varsity football player, finished the two-day tournament as the highest goal scorer on four goals and one assist. While the netball tournament was dominated by team Van Der Stel (VDS) whose players we made up of eight Witsies. The girls brushed aside all their opponents convincingly winning all their games leading to a hard-fought victory in the final against a stubborn Diamond House. 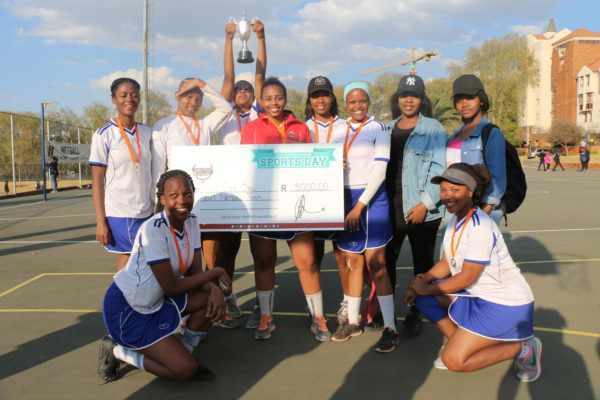 The tournament was hosted by South Point incorporating 15 student accommodation buildings in the Braamfontein area. The accommodation provider houses students from different institutions hence bragging rights were at stake for all institutions being represented.

Kick-off was on a freezing cold Saturday morning and from the onset, Nkosi playing for Epozini made his intentions to help lift the trophy for his team known. The winger only came in as a substitute in the second half of his team’s game against Geldenhuys. He left defenders in awe of his foot work as he weaved through them to score three goals for his team helping them win 4-1.

This stellar performance from the Wits Varsity player continued as he again made the difference in their semi-final game against KSI, scoring a goal which was later judged to be offside. They went on to lose the game but Nkosi ended the tournament as the highest goal scorer.

In the netball tournament, the VDS team coached by Wits BA General student Noxolo Khabanyana, dominated the proceedings, convincingly winning all their games on their way to the final. The final was however a different affair for the dominant team as they came face to face with Diamond House who gave them a run for the R5 000 first prize. The game was decided in extra time with VDS’s eight Wits players proving that their clean sweep to the final wasn’t a fluke.

VDS was the eventual winner for the netball tournament while ReIyant won first prize in the football tournament. The winners walked away with R5 000 prizes for each team and had their team names engraved into the respective trophies.

*Juniour Khumalo is a WitsVuvuzela student and is a resident assistant at South Point.