A Wits lecturer is resigning following a student being injured whilst under her supervision.

A Wits theatre and performance lecturer has received a final warning and resigned, following a student sustaining serious injuries during a supervised practical, which took place on May 22.

Nondumiso Msimanga formally tendered her resignation at the end of June, after 19-year-old Michela Nordmann fell through the roof of the Wits Theatre while rehearsing an in-class performance with her group.

According to Msimanga, the group of three students present on the day were rehearsing for a sight specific performance. She said that she had received authorisation from the department and the Wits Theatre to use the space.

“It was the first time we were on the roof. I went to the roof when I was a student here, so I was familiar with the space. It should have been a safe enough space for them to do what they had to do,” said Msimanga.

Nordmann told Wits Vuvuzela that, “Nondumiso had asked us to please use the objects in the space and explore, you know how drama students are? There were two dome-shaped objects and I had gotten on the bigger one, which I only found out was a skylight after I fell through it.”

The first year student fell two storeys into the men’s bathroom, landing next to the sinks. She sustained various injuries, including “breaking my pelvis on my left-hand side, I broke it in two places, and I fractured my hip. I also broke my wrist and fractured two of my vertebrae from the fall”. 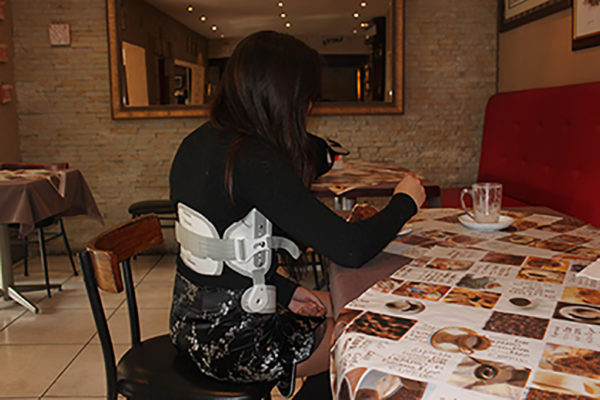 Wits student Michela Nordmann is forced to wear a back brace after falling through the roof of Wits Theatre during a practical.

Nordmann was wheel-chair bound due to the fall, but has since undergone physiotherapy and is now required to wear a back brace for the next two months. “I’m slowly starting to heal, but they think that I will have
long-term problems with my spine,” she added.

She was also forced to deregister from her BA in performing and visual arts, as she was medically unable to meet the practical requirements of the course.

The Wits Employee Relations office initiated an investigation against Msimanga that concluded last month, subsequent to her resignation.

According to Msimanga, the investigation recommended that she seek trauma counselling and provided her with “what was essentially a final warning”.

Msimanga said that her resignation was prompted both by the incident and other personal reasons, however, “my resignation kind of concluded what they were going to do anyway,” she said.

Nordmann said, “I blame Wits, they were careless. Even the fact that Nondumiso took us up there, they should have put in safety precautions to prevent things like this from happening. I feel like they robbed me of enjoying my first year of university and being able to perform and audition.”

Wits Vuvuzela was unable to get official comment from the university at the time of publication. However, Nordmann said that her family had approached the Dean of Humanities, Ruksana Osman, and that the university is helping her with psychological support and physiotherapy.

Msimanga will have served her resignation notice period at the end of September.